Real Madrid Academy: Gov. Wike has Laid a Standard for the Nation to Emulate – Dare 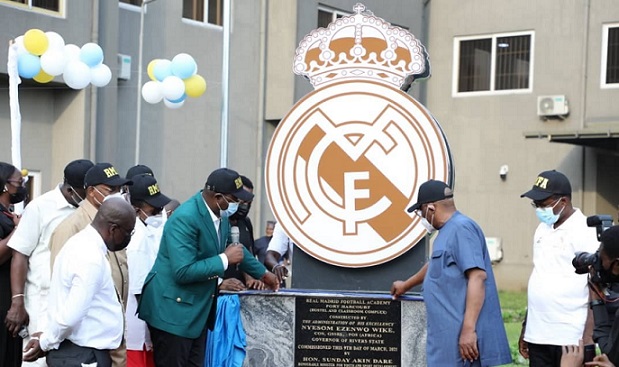 The Minister of Youths and Sport, Sunday Dare said Rivers State governor, Nyesom Ezenwo Wike by building the Real Madrid Academy in Port Harcourt has laid a standard for football development for others to emulate.

He said the academy is worthy and long-term investment in human, and capital development that will soon be the new oil well of Rivers State and huge revenue earner for the country and many families.

The Minister who inaugurated the Academy in Port Harcourt on Tuesday declared that the Academy will change the age long wrong perception and narrative about Rivers and Nigeria as it produces future stars for the country and also for one of the best teams in the world Real Madrid.

“Our hope is that the Rivers Academy would produce renowned super Stars that will toe the paths of the aforementioned legends. Hence, today’s event is a milestone for the actualization of a new era. The Real Madrid Football Academy PH which was founded in 2019 after Rivers State was given the Franchise to operate by the Real Madrid Foundation has been completed in a record time with the main objective to promote the values in football as a profession.

“The Real Madrid Football Academy Port Harcourt is an educational tool capable of contributing to the comprehensive development of personality of our youth by creating jobs and wealth. The Academy divides its activities into sports, educational and cultural. This is in sync with our philosophy of combining education and sports. The speed at which this project was completed must make other countries green with envy.”

The Minister noted that Nigeria is blessed with abundance of talents in football and has consistently been an exporter of footballers across the globe. He said Governor Wike has offered another opportunity to export Nigerian talents.

Dare commended Governor Wike for his vision and commitment to build the academy which is in consonance with the federal government’s grassroots development programs.

“This Academy would not only produce golden boys and girls, but bring prosperity and honor to our great country.  What you have envisioned is indeed awesome and monumental. This Academy is simply fantastic and a monumental achievement that would inspire new generation of talents.

“The facilities are not just world class, but an architectural beauty that would bring out the best in the students. The vision of combining Sports with Academics resonates with the dictum” Sports and education are inseparable “and a cine qua non to the future of our Youths and country.

“Imagine the quantum of kids that would get quality training, education and an assured future with its attendant ripple effects on the economy of Rivers State, the country at large and the families of the beneficiaries. Jobs would be created; families would be lifted from the shackles of poverty and our sports would be the ultimate beneficiary.”

He said the Academy will further strengthen Government resolve to creating new opportunities for youths who have become so restive due to economic crunch resulting in joblessness and the challenges of a new world order.

Governor of Rivers State, Nyesom Ezenwo Wike, said he is emotionally attached to the Real Madrid academy because of his concern to nurture the talents of teeming youth’s sterling football skills.

“I have gone with leaders of the state to watch matches in Madrid. But one thing that has touched me is what can we do because we have s lot of talented young boys who have potentials but there is no way to actualise them. How do we give them the opportunity to see that their dreams come true?

Some people said set up skill acquisition centre. Yes, that is there. What about in terms of football.  Football is no longer a recreation thing. It is now a business. So many countries make money out of football. Look at how many players Brazil sells every year. You can imagine the amount of money they make.”

The governor noted that Nigerians have for years seen football as mere entertainment, but football has gone beyond that as people now make a living out of it.

“you are aware when they sold Neymar for over Two hundred and something Million Euros, one person. Calculate it in Naira. No state government can get that money in a year. One Hundred Million Euro is about Fifty Billion Naira. Two Hundred Million Euro is about Hundred Billon Naira for one player. I know how many States in this country that cannot get Thirty Billion Naira in a year. But one player is getting One Hundred Billion Naira. Gone are the days when people say don’t go and play football.”

He said only Morocco and Port Harcourt host Real Madrid Academy in the entire African continent.

Governor Wike said the academy which has educational arm as well, will groom both male and female footballers.  He implored parents to allow their children who are talented footballers to attend the academy.

“Take the best advantage of what you have. They have basketball because Read Madrid also have a basketball academy. So, we try to incorporate them. If you don’t want to play football, you can play basketball.”

Governor Wike commended Daniel Amokachi for accompanying the Minister of Youths and Sport to assess the State’s investment in sport.