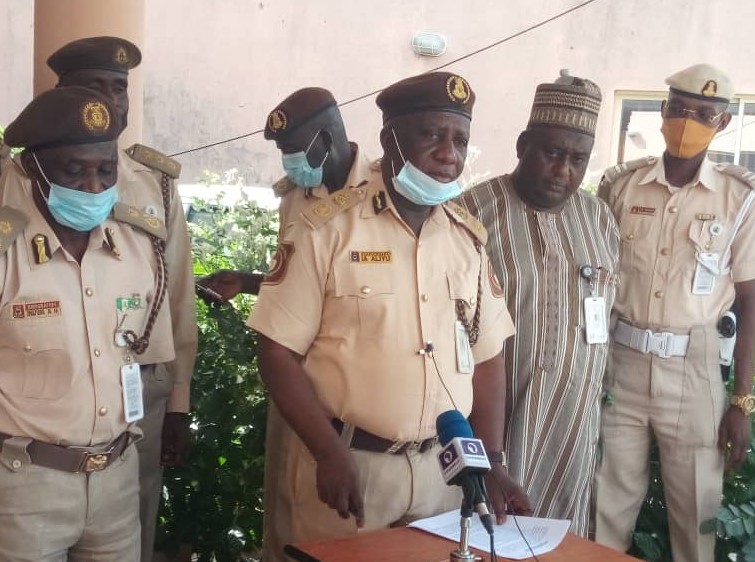 Jigawa State Command of the Nigerian Immigration Service has arrested a 25-year-old Muhammad Suleiman Babaji who specialize on job scam, duping and impersonation.

Parading the suspected imposter, the Jigawa Command Comptroller, Mr. Ismail Abba Aliyu said the man had confessed to committing the act and had even gone to prison in the past for similar offence.

He said, the suspect was arrested while parading himself as younger brother of Comptroller General of Immigration Service, Mr Mohammed Babandede to dupe the Birniwa Local Government Council Chairman.

Mr Ismail added that, the suspect was alleged to have told the council Chairman that, the comptroller General has directed him to collect credentials of two candidates for an automatic job vacancy given to the Chairman.

“After given some amount of money as a transport fee to the suspect, the council Chairman became suspicious and immediately placed a called to the CG who confirmed to him no any automatic job in Nigerian Immigration service.”

The State Comptroller further revealed that, the CG than directed him to go an arrest the suspect and handed him over to police for investigation.

In an interview with newsmen on Wednesday, the suspect confirmed committing the crime but insisted it was an act of destiny.

Babaji also revealed that, he has been in job scamming and other related crimes for over 2 years but he is now regretting the embracement it caused him.

It was observed that, due to the economic hardship and high rate of unemployment in the nation, many criminal minded youth resorts to duping people by offering fake Jon offers.