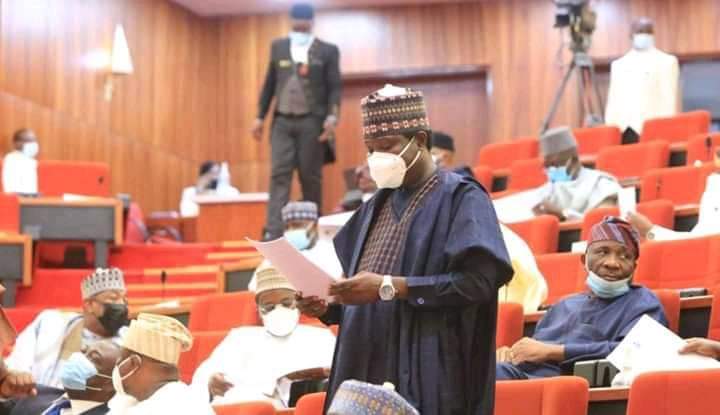 You might believe with me that, the workaholic Senator has been working tirelessly to improve the livelihood of entire Nigerians, when he assumed mantle of leadership as Chairman Committee on TETFund in which majority of tertiary institutions in Nigeria breath fresh air of life by receiving jumbo funds for the execution of various developmental projects that boast the education sector in the country.

Meanwhile, on assuming as Chairman Appropriation committee, the One-in-three Senator pay more attention to ensure speedy passage of the budget in Nigeria thereby ensuring that all budget allocations of the ministries and parastatals were appropriately scrutinized and make necessary amendment before signing them into law by Mr. President on the right time.

However, other sectors which comprises engaging in Empowerment program to youth in his constituency have received more attention.

In an effort to engage the youth with means of livelihood, recently the Senator distributed Agricultural aids to farmers such as Cow, fertilizers, and other farm equipment to the farmers with a view to encourage them to engage into farming activities in the entire (13) local government areas of Kano North.

No stone will be left unturned without commending his gesture on construction of classrooms, Roads as well as provision of portable drinking water through mass drilling of borehole across the zone.

Students associations in the zone were not left behind, as the workaholic Senator set up committee for disbursement of laptop computers to each students’ association across the zone.

Nevertheless, even women at grassroots benefits marvellously with number of self reliant or skill acquisition tools as part of his contribution to ameliorate the suffering felt by the electorate through empowerment program where grinding machines worth millions of Naira would be distributed to them in due course.

I will not put-off my pen without mentioning the giant stride achievement drive ushered to the good people of Kano North by the Tireless Working Senator, where each local government benefits with establishment of National Open University of Nigeria (NOUN) study centers.

This effort is worthy commendable as the projects do not only impact on the people of Kano North alone but the entire Northern Nigeria. Taking look at our Sister States in the Southern part of the country where some states have more than thirty (30) Universities despite their meagre population as compared with that of Kano State with highest population in the country by 2006 population census.

Going by these few achievements recorded under the able leadership of the distinguished Senator.  I suggest that people of Kano State should do the needful by standing firmly and vote-in Hon. Senator Barau I Jibril as the Executive Governor of Kano State come 2023 in order to steer the leadership of the commercial centre of the country for its betterment and Nigeria as a whole.

Counterfeit and Fake Drugs Worth About 1m Naira Intercepted in Kano