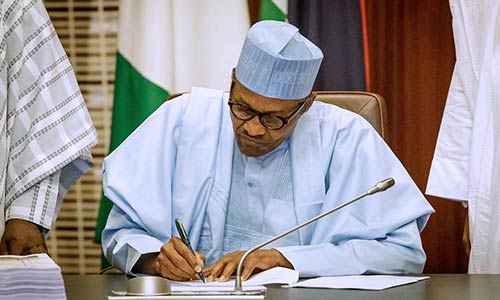 In June 2018, at a well-publicized ceremony in the Presidential Villa, President Muhammadu Buhari assented to four bills, thereby amending the Constitution of the Federal Republic of Nigeria of 1999. Keen observers would recall that in 2017, bills seeking to alter various provisions of the constitution were presented before the both Chambers of the National Assembly. By mid-April 2018, the National Assembly had sent the approved bills to the State Houses of Assembly for their resolution.

These amendments are undoubtedly significant in deepening the nation’s democracy. However, granting financial autonomy and independence to the Houses of Assembly of the respective states stands out. If properly implemented, it holds the potential to strengthen the principles of separation of powers, checks and balance at the state level. It sought to address the financial dependency which has weakened the power of the legislature for effective oversight and hold the executive accountable.

Again, we are not quick to forget the overbearing control by some governors, which was demonstrated in 2010. The National Assembly had forwarded the financial autonomy bill to the state legislatures for concurrence. The bill, which sought to empower them, failed to get the mandatory two-third resolutions needed to pass it. It was a brazen expression by the legislature then the fear of the governors was the beginning of wisdom, as they determine their funding and who becomes principal officers.

Expectedly, the assent by the President elicited high expectations among stakeholders. The anticipation was that governance at the state level would now be more transparent, accountable and responsive to the needs of the people. Many thought that the days when state legislators were only glorified rubber stamp agency of the executive was over. That annual budgets will now undergo meticulous scrutiny; and statutory oversights will no longer be mere ceremonial visits to Ministries, Department and Agencies (MDAs).

To borrow the title of the autobiography of the former South African President, late Nelson Mandela, it was more or less a “long walk to freedom” for the State Assemblies, many believed. Indeed, a long fight for freedom from living in bondage under the shackles of governors; who they owe their total allegiance to, more than to their constituents. However, this unfortunately was a pre-mature celebration that wrongfully assumed the governors – without a fight – would just adhere to the constitution, as amended.

In disregard for the constitution, many of the governors refused to put their states’ legislature on first line charge. At a point in time only about nine states, including Lagos, Delta and Bayelsa, had commenced financial autonomy for the legislature and judiciary, as was reported in the media. This, it is believed, led the President to further set up the Presidential Implementation Committee on Financial Autonomy for Judiciary and Legislature.

The committee was constituted to fashion out strategies and modalities for the implementation of financial autonomy for states’ legislature and judiciary in compliance with section 121(3) of the 1999 Constitution. Having received the report of the committee; the President signed into law the Executive Order No. 10 of 2020 for the implementation of Financial Autonomy of State Legislature and State Judiciary Order. The implication of the order is that funds standing in the credit of the Houses of Assembly in the states are now to be paid directly to the Houses of Assembly and Judiciary.

In the case of failure by the state governors to remit the money due to the legislative arm, the Accountant General of the Federation (AGF) is empowered to deduct and remit from the amount standing to the credit of that state in the Federation Account. This means that the State Houses of Assembly would have more independence in carrying out its legislative duties.

In a swift reaction, the executive governors of the 36 states filed an action against the President before the Supreme Court of Nigeria. They sought an order setting aside the Executive Order 10 of 2020, on the ground that it is in violation of the Constitution, insisting that “it is unconstitutional”. They prayed that the powers vested in the Accountant-General of the Federation by the order to make deductions from funds which form part of the Consolidated Revenue of the States is inconsistent with the provisions of Section 120 and 121 of the constitution and therefore void.

Similarly, the media reported that state governors had also engaged the speakers of the State Houses of Assembly to ensure they do not lose total control of the legislative arm. At the said virtual meeting, the governors agreed to grand financial autonomy to legislature; but under the condition that the autonomy will be limited to handling only the salaries and training of the members. The executive on the other hand would retain its power over the award of contracts on any capital project within the respective states.

This desperate twin-move by the governors was aimed at neutralizing the executive order, which is to ensure the state legislature does not need approval from them to carry out their respective duties.

While expressing his consternation to the move by the governors, Nigeria Labor Congress (NLC) President, Ayuba Wabba, had retorted: “If our political leaders were alive to the spirit of the constitution they swore to uphold, there would not have been any need for the Presidential Implementation Committee set up on March 22, 2019; almost one year after section 121 (3) had been assented into law and at least the exercise of one budget cycle.”

It is obvious to discerning Nigerians that the action of the governors constitutes a stumbling block towards deepening and strengthening democracy at the state level. This is ironical because the same governors advocating for the decentralization of the powers of the federal government, are bent on pocketing the state legislature. This raises the question whether or not the executive order signed by President Buhari, is potent enough to compel governors to grant financial autonomy to state legislatures.

Nigerians must realize that executive orders have huge limitation because it is just a signed and published directive by the President, without the efficacy of a law. The extent to which it can be binding on the governors, considering the fact that we run a federal system, remains a matter for legal interpretation. We must also note that the National Assembly and Federal Courts have powers to strike down executive orders that exceed the scope of the president’s authority.

In view of this, stakeholders need to urgently take ownership of the advocacy to ensure the total granting of financial autonomy to the legislature, including the judiciary. The time is ripe to save affected states from wanton god-fatherism, mismanagement and absence of accountability by many governors, as a result of weakened state legislature.

All stakeholders need to demand that the legislative arm in states is given the requisite independence to check the executive arm; thereby, making them more responsible, responsive, transparent and accountable to the yearnings of the people, in respect of democratic dividends and good governance