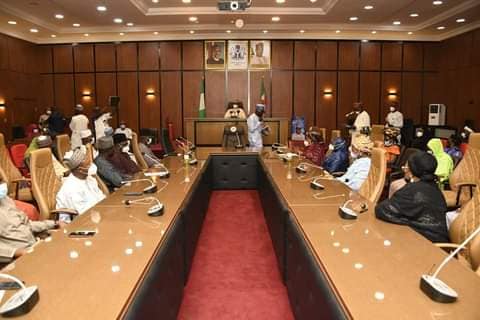 Niger State Governor, Abubakar Sani Bello has inaugurated a 20-man committee on Gender-Based Violence (GBV) to curb all forms of violence against both genders in the state.

A statement signed by the Chief Press Secretary to the Governor, Mary Noel-Berje said Governor Sani Bello described the event as important considering the increase in Gender-Based Violence in the society while inaugurating the committee at Government House, Minna, which he said has translated to abuse of human rights in recent times.

The Governor who observed that Gender-Based Violence is not restricted to only female gender but the male as well, explained that constitution of the committee will pave way for better society adding that members of the committee have the capabilities to address the menace in the state.

In her response, the Chairperson of the Committee and Wife of the Niger State Governor, Dr. Amina Abubakar Bello appreciated the Governor for inaugurating the committee saying it is a display of political will and an evidence of the state government’s commitment towards curbing GBV in the state.

The Chairperson noted that GBV, which cut across both genders, has been deeply rooted in the society noting that women and girls are more vulnerable assuring that, with the Committee in place now, more grounds would be covered in terms of advocacy and prosecution of offenders to serve as deterrent to others.

She said the statistics of GBV in the State is worrisome particularly during the COVID-19 lockdown where there was an exponential increase in rape cases affecting old women and children of less than three months.

The Chairperson of the Committee stressed the need for more awareness for people to report such cases and discourage stigmatization.

The Wife of the Governor said the Ministry of Women Affairs has been working tirelessly in collaboration with other relevant organizations such as Sexual Assault Referral Centre code name RAYUWA which is a one stop shop for addressing and caring for the GBV victims.

She requested for the replication of such centres across all the Local Government Areas in the State pointing out that the responsibility of curbing GBV lies with the Government, all critical stakeholders and the support of the general public.

The Chairperson disclosed that the National Academy of Science has selected Niger alongside Ekiti, Abia and Oyo States to benefit from a grant from Ford Foundation to implement policies and strategies to address GBV in the selected States.

Maximize the foods available to you by using savvy dieting techniques!