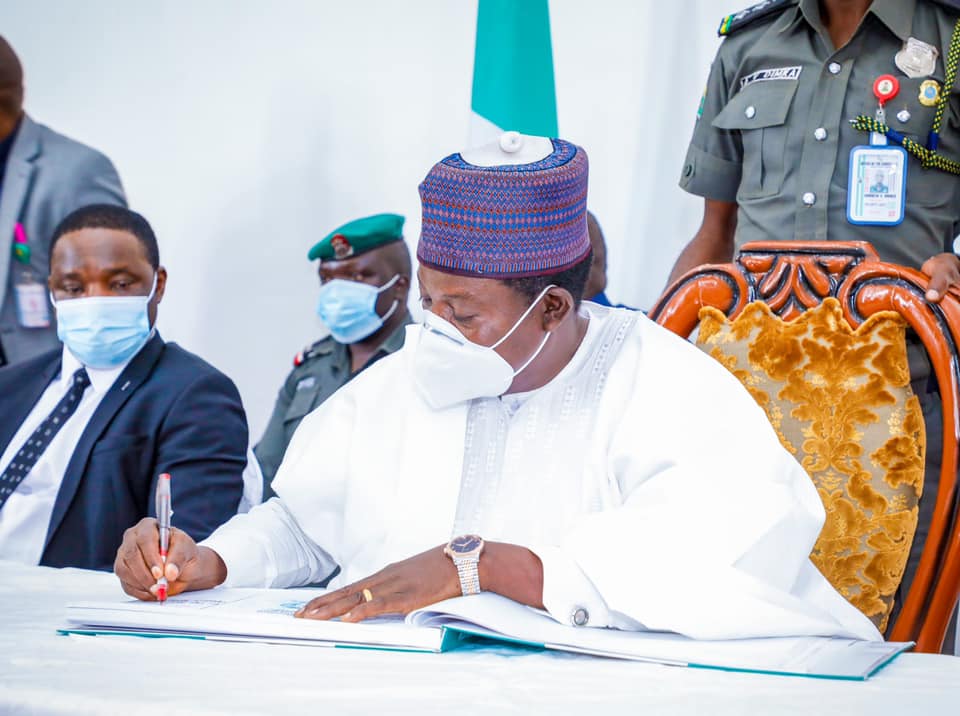 Plateau State Governor, Simon Bako Lalong has vowed to sign the death warrant for anyone convicted for kidnapping in the State.

This was contained in a signed statement by the Director of Press & Public Affairs to the Governor, Dr. Makut Simon Macham.

At the event witnessed by the President Court of Appeal Justice, Monica Dongban-Mensem, Lalong who described as worrisome the incidences of kidnapping and other violent crimes in the State frowned at the situation where suspected kidnappers who are arrested are not prosecuted as and when due and, in some cases, released without charge.

Gov Lalong said “This situation perhaps emboldens the continuous onslaught on the citizens by kidnappers. While we are addressing the issue with the police relating to arrest, investigation and prosecution, I want to appeal to our Judges to be very firm in trying such Cases when brought before them as Kidnapping is fast becoming an Industry with no one immune from the menace.

“As Governor, I have promised to sign the Death Warrant in respect of anyone convicted of kidnapping which is giving our people sleepless nights, driving away prospective Investors and further impoverishing our people. Many of them are forced to pay ransoms to secure the release of loved ones which is making people afraid to pursue their legitimate businesses including farming”.

To the new Judges, the Governor charged them to be faithful to their oath of office and consider their appointments as a call to serve God and humanity which should make them work faithfully and diligently.

“I advise you to be mindful of the attempts to compromise your integrity and impartiality by people who will approach you with tempting proposals of all sorts. As those who have the rare privilege to determine the fate of people that appear before you, be careful not to abuse this precious trust.

“In as much as you have this privilege, you should also realize that you are not above reproach and can be held responsible for your actions by both man and God.  Therefore, I advise you to strive to write your name in Gold by abiding to the ethos of your professional calling at all times during your career” he said.

Lalong also used the opportunity to debunk the insinuation that his administration is not paying attention to the judiciary, a claim that he said is unfounded as his government has done so much for the judicial arm since coming to office despite the paucity of funds.

He listed some of the interventions to the judiciary to include: Construction of the new High Court Headquarters Complex; settlement of inherited 2 years arrears of Judge’s entitlements for 2013 and 2014; approval for training of Judicial Officers, particularly Judges within and outside the Country; approval for the Judiciary to recruit over 200 Staff including relevant support Staff; establishment of the State Account Allocation Committee (SAAC) which lays the ground work for the implementation of financial autonomy; as well as payment of all accrued arrears of housing allowances of superior Court Judges, on account of which some Judges took the State Government to court among others.

This he said vindicates him and as such, the insinuations out there suggesting that he does not care about the welfare of Judges or is denying them their entitlements are incorrect and should be discountenanced.

As a member of the revered Legal Profession, the Governor re-assured the judiciary of his personal commitment to the welfare and well-being of Judges and all Judicial Staff despite the major challenge of lean financial resources of the State worsened by the COVID-19 pandemic and the economic recession.

Responding on behalf of the new judges sworn in, the President, Customary Court of appeal Justice Sati Patrick Dapit said they will do their best to live up to the oath of their office and the ethics of the legal profession for the interest of the society.

The judges were later presented with their official cars.