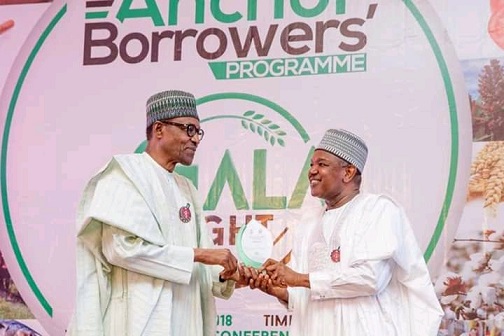 No fewer than 150,000 farmers from across the 21 Local Governments in Kebbi State and civil servants are expected to benefit from various (Anchor Borrowers Program) ABP loans facilities for Dry & wet seasons for all crops and other agricultural intervention programs in animal husbandry & fisheries during the 2021 dry season farming.

This was disclosed by​ Alhaji Abdullahi Saidu Argungu the Chairman of the Kebbi State Wheat Farmers Association and the Sarkin Noma of Argungu Emirate, during a stakeholder meeting in Birnin Kebbi.

He stated that, a census of the farmers, across the state, was currently being taken, sequel to the directives of Governor Atiku Bagudu.

The Sarkin Noman explain that “the census is to collate the names of only credible and genuine farmers, who have farms and are also willing to engage in farming activities not restricted to rice farming alone.

“This, he said is a​ deviation from the norms in the past were some beneficiaries of such facilities were not genuine farmers, “adding that the Governor is willing to assist and he also wants a situation where all those farmers who are genuinely engaged in various farming activities get all the facilities they require.

“This will certainly have a multiplier effects on the nation’s good security and that of Kebbi State. “

Other issues discussed was to​ include the participation of stakeholders such as traditional rulers, local government structure and public officers in ascertaining authentic farmland location as well as their coordinates including the requirements of farmers for possible assistance.

Argungu also disclosed that, sequel to the negative tolls of the raging global Coronavirus Disease Pandemic on the economy, the Central Bank of Nigeria extant interest rate of 9 per cent had been reduced to 5 per cent.

“Agriculture is time bound and in sha Allahu, whatever is due to these farmers will soon get to them.

“NAIC has also been brought in to ensure that any farmer who incurs a lost gets reimbursed with a 2 per cent economic cost of production.

“The Governor has also directed that all the hitherto myriad of ABP programs, both public and private are harmonized and standardised, ” Civil Servants would be among the target beneficiaries’, he averred.

He further explained that sequel to the directives of the governor, traditional leaders especially District Heads and Village Heads would be fully engaged in ensuring that Government’s agricultural intervention programs reached the target beneficiaries.

One of the participants, the Chairman of Jega Local Government Area, who doubles as the state Chairman of the Association of Local Governments of Nigeria (ALGON), as well as the National Vice President of ALGON, Alhaji Shehu Marshal -Jaga, commended the efforts of the state government in making sure that all the stakeholders had been involved in the agricultural revolution for food security in the country.

“These efforts to generate data to be used will help farmers to attract intervention for more yields in the agricultural production,” he said.

Shehu Marshal​ also assured the commitment of all the LG Chairmen in complimenting the efforts of the government in making sure that the genuine and targeted farmers benefitted from the government’s loans and programs.

He also thanked governor Abubakar Atiku Bagudu for his foresight in making sure traditional leaders at the grassroots were involved.

Highlights of the meeting which took place at the Anchor Borrowers Office in Birnin Kebbi featured discussion on Farmer/ loan Registration Form, introduction of the concept and expected outcomes, 2021 Dry Season Rice Production, suggestions as well as questions and answers.