ABF Advocates for Sustainable Funding for Nutrition in Jigawa State 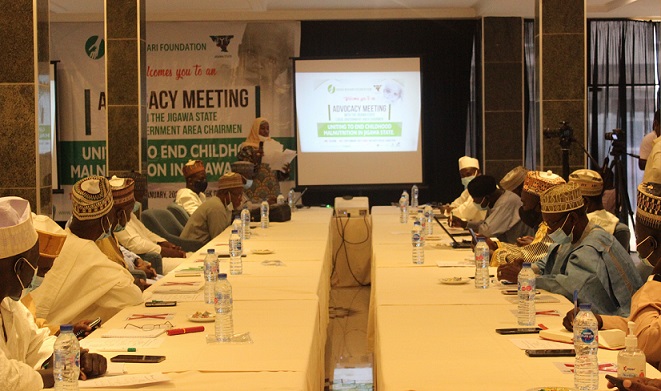 The objectives of the meeting were to sensitize the participants on the malnutrition situation in Jigawa, update the LGA Chairmen about Masaki Nutrition Initiative and advocate for sustainability of LG nutrition funding.

Speaking to journalist at the meeting, Program Coordinator (Health and Development), Aisha Buhari Foundation, Dr Omole Ukwedeh said: “The meeting was also to ensure that all government efforts on nutrition are highlighted with a view to get LGA Chairmen make specific and attainable commitments on how they can sustain nutrition funding.”

Stallion Times reports that Nutrition indices for Jigawa (SMART 2014-2020) reveals that about 60 per cent of children under the age of five years are suffering from impair growth due to acute severe malnutrition in the state.

The children are witnessing a high degree of stunting as a result of nutrient deficiencies making them prone to infection, inadequate psychosocial stimulation and other life-threatening complications.

The state government has shown commitment to curbing malnutrition through its MASAKI Project (a home-grown solution), state funding and LGA chairmen’s support to funding nutrition.

“In the past 3-years, the Jigawa State Government has committed not less than N300 million as part of efforts to improve nutrition among the children under the age of five,” Ibrahim-Aliyu added.

“And I want to assure you that we will not relent in our efforts towards ensuring free malnutrition in the state. Especially with the support from Aisha Buhari foundation and other partners.”

According to him, there is a lot of improvement in the state on the issue of managing malnutrition compared to 10 years back, hoping that as time goes on more improvement can be recorded.

The Chairman, Association of Local Government of Nigeria (ALGON) in Jigawa, Alhaji Aminu Sani-Gumel who is also the Chairmen, Gumel LGA, said the chairmen have been putting a lot of efforts in the struggle against malnutrition in the state.

Each LGA chairman spends over N200 thousand monthly to end the malnutrition, this will continue, he assured.

Discussions at the meeting disclosed that none and irregular payments has been the order of the day to such pledges.

Some of the successes recorded in the efforts to reduce cases of acute malnutrition in Jigawa includes budgetary release by government to procure Ready-to -Use-Therapeutic Food (RUTF), the new innovation of ‘’Masaki Nutrition Program’’ being implemented in 150 communities across 27 LGAs & plan for scale up to more locations, standing order for funds for transportation of RUTF, Routine drugs and Community Volunteer’s stipends and the plan for Community Management of Acute Malnutrition (CMAM) scale up in 15 LGAs.

At the end of the meeting, all the LGA Chairmen committed to contribute N150,000 monthly through direct deduction from their LGA statutory allocations to sustain nutrition funding in the state.

Aisha Buhari foundation (ABF) is a non-governmental, none partisan and not-for profit organization established in 2015 with the aim of advocating for the wellbeing of women, children and adolescents in Nigeria.

ABF is a member of the SAM Advocacy Consortium, a collaboration between 4 organizations that advocates for the prioritization of nutrition intervention by state government with each partner advocating on a different platform.