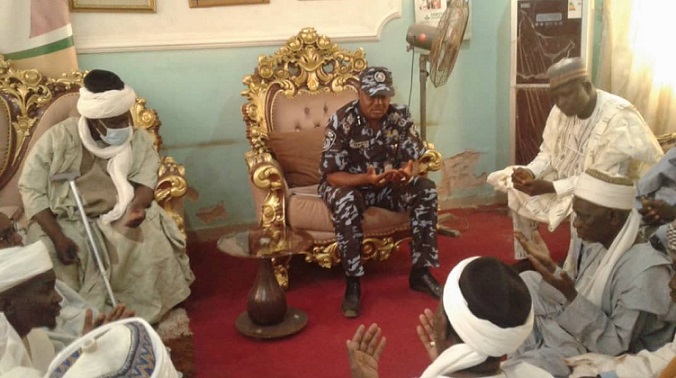 The State Commissioner of Police, Ali Aji Janga said the enlarged community meeting of Stakeholders in Sabon Birni and Isa Local Governments Areas (LGAs) was aimed at providing adequate and effective security network in the two hard to reach areas of the state.

Inhabitants of the two LGAs have been experiencing sleepless nights as a result of activities of criminal gangs and other men of the underworld, which prompted   the command to enlarge its security network in the areas.

In a press statement made available to newsmen by the Command’s Public Pelations Officer, ASP Muhammad A Sadiq, the CP reaffirmed his commitment to free the state of all forms of Crimes and social vices.

The Commissioner visited the North eastern Local Government Areas of Sokoto that shares boundary with Niger Republic for a stakeholders consultative meeting.

The statement further showed that, in each of the LGA, visited by the commissioner, enlarged security consultative meeting was conducted, which deliberations yielded positive results and if implemented would advance security and improve public safety in rural areas of the State.

Also, in the in the statement, the command said a similar meeting would be held in other local Governments areas of the state for the same purpose.

Sabon Birni and Isa local Governments areas suffered much of the security challenges facing the state, it stated.

The Commissioner however advised the two communities not to hesitate in reporting movement and activities of suspected persons and Criminals in their midst to security agencies stationed in their areas, says the statement.

The statement disclosed that, the Commissioner was accompanied in the visit by strategic and operational commanders of the Sokoto police Command