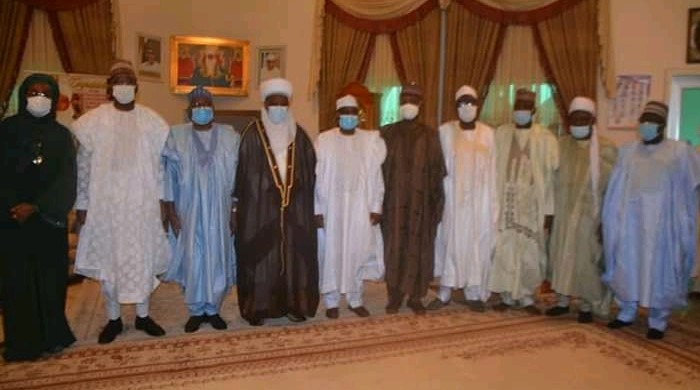 The Federal Government has expressed its determination to support the reconstruction of burnt Sokoto Central Market.

The leader of the Federal Government delegation and chief of staff to president Muhammad Buhari professor Ibrahim Gambari disclosed this while delivering the message of   president Buhari to the Government and people of Sokoto state over the unfortunate fire disaster that destroyed over 60 percent of the States central Market.

He said president Muhammad Buhari was deeply torched and expressed his sadness over the unfortunate disaster that crippled the economy of Sokoto, Kebbi, Zamfara and Niger republic traders who daily patronized the Market.

He said Federal Government would not only support victims of the fire incidence, but would also support the Sokoto state Government in the reconstruction of the burnt central Market.

In his response, Governor Aminu Waziri Tambuwal expressed delight with   the concern shown by president Muhammad Buhari on the flight of the people of the state.

He said what impressed him much is that the president has issued a statement condoling the state and victims of the incidence and now as if it’s not enough, he sent another high-powered delegation under his chief of staff to condoled the victims.

He thanked the delegation for the visit and prayed Allah to return back to Abuja safely.

While at the Sultan palace, the leader vof the delegation professor Ibrahim Gambari told the Sultan that they were in Sokoto to deliver presidents condolence message to people of Sokoto state over the recent fire disaster that destroyed over 60 percent of central Market.

He said the federal Government would stand by the state Government in it’s bid to reconstruct the burnt Central Market.

Professor Gambari explained that Sokoto people are Peace loving and industrious as such they need to be supported from every angle.

Desponding the Sultan of Sokoto Dr Muhammad Sa’ad Abubakar III thanked the president for his concerned to the happenings in the State.

He said the burnt central Market is the source of lively hood of many people in Sokoto and other neighbouring state as such its rebuilding is of Paramount to their socioeconomic development.

The Sultan called on the federal government to support the state Government in its effort to rebuilt the central market within a short period.

The delegation was later conducted round the burnt central Market by Governor Aminu Waziri Tambuwal and some members of the state executive council.