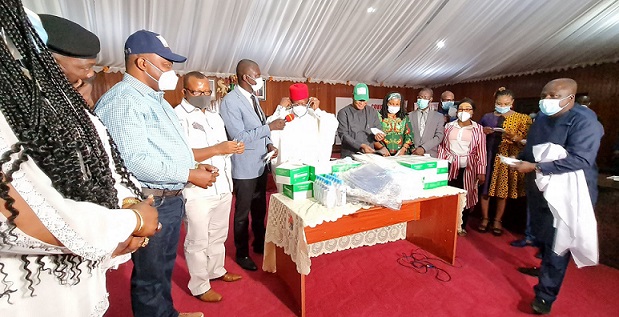 The Governor of Ebonyi State, Engr. David Umahi has banned activities of beer parlours, night clubs and other public places with effect from Friday the 22nd of January 2021 to forestall the second wave of coronavirus in the State.

The Special Assistant (Media and Publicity), Francis Nwaze said Umahi announced this while flagging off the Covid-19 second wave protocol compliance campaign at the Exco Chambers of the old Government House, Abakaliki.

The Governor while directing complete enforcement of Covid 19 precautionary measures including not more than two hours of worship on Sundays announced plans to begin local production of oxygen in the State to cut the cost of fighting the coronavirus pandemic.

He called on the people to embrace steam inhaling to detoxify themselves as he expressed determination of Government to scale up testing beyond 450 per Local Government Area.

According to the statement, Governor Umahi mandated stakeholders to step up sensitization and supervision to schools and other public places.

Gov. Umahi commended the Deputy Governor and the Speaker for the credible ways they have been spearheading the war against Covid-19 in the State and appealed to the general public to continue to observe the precautionary measures.