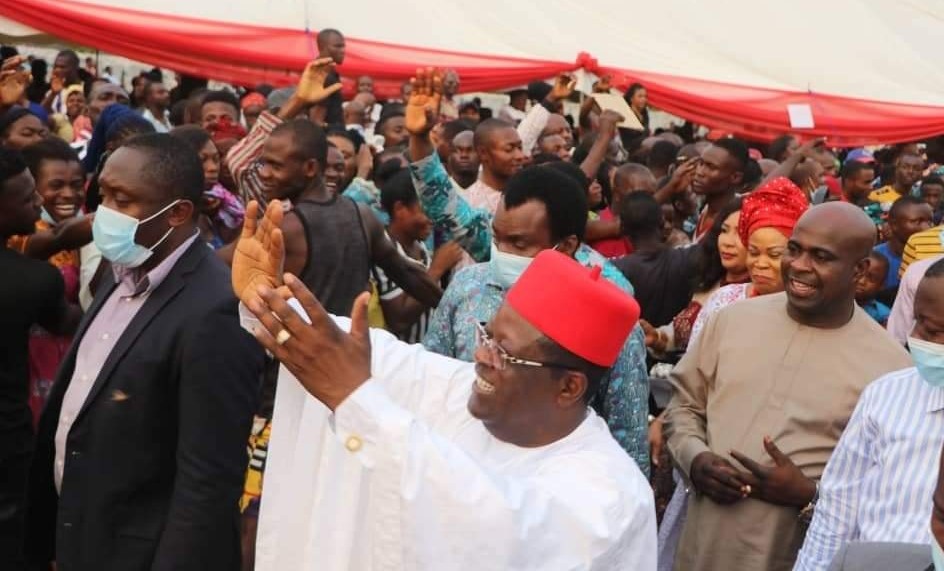 Ebonyi State was created 24 years ago, specifically in the year, 1996 from Abia and Enugu States.

As a newborn, the state has passed through ups and downs, lots of turbulent situations, marginalization, underdevelopment, discrimination, etc. It was a work in progress and lots of energy was dissipated by leaders in the past to see to the change of the narratives but all efforts always make little or no effect.

Admittedly, all the past administrations made efforts in their different areas of concern, depending on their leadership abilities but Ebonyi state remained an exemplary state when poorest, dirtiest, poor road network, low IGR, etc were mentioned.

Almost everyone would wish to disassociate self from being identified as an Ebonyian, the inferiority complex caught almost everyone.

Evidence abounds that first-time visitors mostly pray not to visit again for their bad experience. No one could wear white clothing and walk around the street except the owner would prefer the colouring of the clothing to turn to either mud or dusty colour. It was a bad experience indeed, nothing was working. Potholes in the roads could make a pregnant woman deliver before her time.

While all these were going on, everyone in the state was secretly in prayers and supplication to God for the leader that will play the role of Moses to Egyptian, David to Israel against their Goliath and the Messiah that will know the true needs of the masses.

In the build-up to the 2015 general election, the space was charged with lots of permutations, political analysis, games of the throne, etc. It was a battle for the soul of the state, a make or mar battle. The now Governor was the then Deputy Governor and he was in waiting for a directive from God, to run or to leave. Months later, he received the message, God’s message and he declared for the contest for the number one position of the state.

The team was christened “Divine Mandate”, it was a tug of war, major battle against the power brass but the Divine Mandate miraculously triumphed at the end. Governor David Umahi was elected the Governor of Ebonyi State and was successfully sworn in on the 29th May, 2015 and the Journey to the liberation of the state began.

Having seen the much work, including cleansing, that was needed to be done in the state, Umahi passionately began his leadership with 7 days of fasting and prayers, for total liberation, transformation and strength to work in his new office.

The first 100 days in office as Governor, Umahi had turned Ebonyi into a construction site with modern technologies, direct and consistent supervision of the projects, the introduction of a new style of construction and timely delivery of the projects and execution of projects with direct labour to save the not meagre resources of the state.

It began with the cement technology in road construction, a phase that came with mixed reactions as many were yet to understand the technology of concreting roads but it was however warmly welcomed when the longevity of the technology was proven to be far beyond the use of asphalt. The streets of Abakaliki which was hitherto filled with potholes and mini ponds were transformed with the new technology.

As of today, six years down the lane, the road projects executed with the concrete technology are still standing firmly as though they were constructed yesterday.

This standard was spread across other council areas as more than 20 kilometers of roads were commenced and completed across the council areas. The Governor was not relenting, bearing in mind that access to good road is a clear pathway to the development of any developing city. As at today, He has constructed and reconstructed several roads that space will not be enough to mention one after the other but there are visible to even the blind across the state to see.

Like the biblical mustard seed, Ebonyi which was relegated to the background as a second class has gradually assumed a vantage position in the comity of States courtesy of continuous transformation by the subsequent leaders of the State.

Currently, under the reign of Governor David Umahi, Ebonyi State can now boast of at least 16 edifying and state of the art flyovers scattered in parts of the State which are not only adding extra aesthetics to the cities but also saving Ebonyians from the hazards of incessant road accidents which hitherto characterized the Abakaliki Capital city.

Margaret Umahi’s International Market and the Shopping mall, one of the biggest in Africa have jointly beefed-up economic activities in the Capital city and promoted the State’s Gross Domestic Product, GDP.

The new Ebonyi State University Teaching Hospital Uburu is promising to become a world-class medical tourist centre for practitioners within and outside Nigeria when fully completed while the Ebonyi International Airport will bring Ebonyi to the global limelight when flight operation eventually commences hopefully before the end of 2021.

The Ebonyi Olympic Stadium is hoped to revive sporting activities in the State and regenerate the moribund sports infrastructure and culture in the State.

Above all, the streetlight has not only illuminated the capital city and environs at night but has also added an extra boost to the security of the benefitting residents as night marauders no longer hide under darkness to perpetrate criminal activities.

Several bridges have been constructed to reconnect villages and communities to their neighbour who had been cut off by collapsed bailey bridges in parts of the State. Today, rural farmers can export their produce to the urban with ease, hence ensuring food sufficiency and affordability.

The capacity of Ebonyi Youth and Women especially widows and the less privileged has been enhanced with several interventions and empowerment schemes that have changed their narratives from nonetheless to employers of labour in their various chosen trade courtesy of the people-oriented leadership of Governor David Nweze Umahi.

Ebonyi has move up to join the first-class position as the food hub of the nation through the consistent strengthening of the capacity of the rural farmers through adequate provision of fertilizers and other requisite inputs by the State Government.

Virtually, every facet of the livelihood of Ebonyians have enormously received a boost such that within six years of Governor Umahi’s leadership, Ebonyi has transformed from the rejected stone to the Chief Cornerstone of the House.

Ebonyi state of today has now become a city to visit, invest, live in peace with a secured and safe environment.