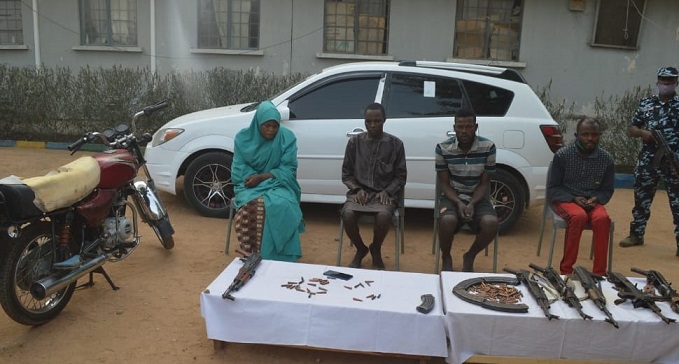 Police in Kano have arrested 4-member syndicate of suspected kidnappers in Kano.

The suspected kidnappers’ group led by a woman, Maryam Mohammed, alias Hajiya, operated in Zamfara and Kano before their arrest.

Upon receipt of the complaint, the Commissioner of Police, Kano State Command, CP Habu A. Sani, psc, raised and instructed a team of Operation Puff Adder, led by DSP Shehu Dahiru, to arrest the culprits, he added.

He said the Team swiftly swung into action, and following credible intelligence, on 15/01/2021, raided a rented apartment located at Jaba Quarters, Ungogo LGA of Kano State where the victim was held hostage and engaged the occupants of the house in a fierce gun duel.

The Police spokesman said one AK-47 Rifle, one magazine loaded with 30 rounds of live ammunition and an unregistered boxer motorcycle were recovered.

He further explained that “investigations revealed Maryam’s husband, one Sani Ismail, of Bidda LGA of Niger State, who was a Notorious Cattle Rustler, was killed in Butsa Village, Gusau LGA of Zamfara State while carting away rustled Cows.

“After the death of the husband, her brother, one Hamza Dogo, ‘m’ of Butsa Village, Gusau LGA of Zamfara State, also a notorious kidnapper relocated her to Kano where she rented apartments in Unguwa Uku, Panshekara and Maidile Quarters.

She later moved to Jaba Quarters and rented another apartment for Six Hundred Thousand Naira (N600,000.00), per annum, which she turned into a kidnappers Den.”

According to the statement, during interrogation, the kidnap Kingpin Maryam revealed that on 12/01/2021, they contacted the victim via his Mobile Phone and told him to bring a new Samsung Handset for her to buy at Sixty-Five Thousand Naira (N65,000.00).

She also disclosed that the victim drove his Toyota Vibe Motor Vehicle to the apartment. They opened the gate of the house, and as soon as he entered, the four of them (suspects) attacked him. They tied him up, took his Motor Vehicle to Zamfara State and contacted his family for Ransom cash of Ten Million Naira (N10,000,000.00).

The suspect disclosed that though, they demanded ransom, their plan was to kill him after collecting the ransom cash, because the victim knows the apartment and recognizes them.

She confessed further that, on 02/10/2020, the same syndicate kidnapped one Alhaji Shafiu Umar, of Naibawa Quarters, Kumbotso LGA of Kano State, and held him hostage in Zamfara State. They collected a ransom cash of Ten Million (N10,000,000.00) and a brand-new Boxer Motorcycle and also made away with his Toyota Corolla LE Motor Vehicle valued at Two Million, Five Hundred Thousand Naira (N 2,500,000.00).

The Toyota Vibe Motor Vehicle was recovered from one Ishaq Yusuf, ‘m,’ 28 years old of Gidan Dawa Quarters, Gusau LGA of Zamfara State on the 19/01/2021 in Zamfara. All the suspects confessed involving in series of kidnappings in Kano and Zamfara States.

The Commissioner of Police, Kano State Command CP Habu A. Sani, psc, ordered for discrete investigation for the Police to arrest accomplices of the syndicate and recover their operational weapons. Meanwhile four (4) other AK-47 Rifles with 81 Live Ammunitions were recovered during Mop-up operations within the State and investigation is in progress.

With these developments, the good people of Kano State are advised to be watchful of their environments and be wary of those renting apartments in their communities. The command remains committed to ensuring that peace prevails in the State.