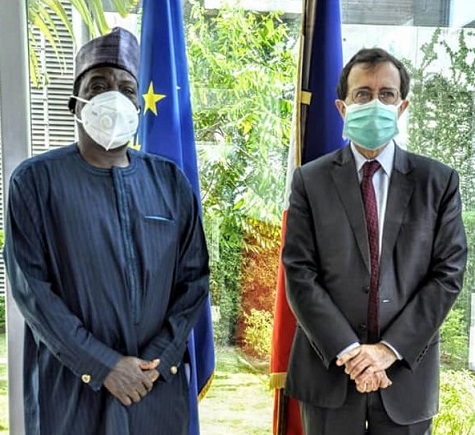 Plateau State Governor Simon Bako Lalong was at the France Embassy in Abuja on Tuesday, to hold discussions with Ambassador Jérôme Pasquier on the development of the mineral sector in Plateau State and other areas of investment.

This was contained in a statement signed by the Director of Press & Public Affairs to the Governor of Plateau State, Dr. Makut Simon Macham.

Governor Lalong who was accompanied by the Commissioner for Mineral Development Jude Elias Dakur said he was at the French embassy to discuss the economic potentials of the State and explore areas of collaboration for investment and exchanges that will benefit people on both sides.

He said “Plateau State is famous for a variety of minerals which gave our State the name “Tin City” during the colonial days. Even though some of these minerals were taken away without tangible benefits to our people, a lot of these endowments are still available with many yet to be exploited.

Some of the potentials of the State include metallic minerals namely: Tin, Columbite, Lead and Zinc; Non-metallic ones include Kaolin, Dimension stones and Granites, Gemstones like garnet, aqua marine among others. We also have mineral fuels like natural gas and coal.”

Lalong said his major concern since coming into office in 2015 has been to see how to utilize these potentials to improve the living standards of the people.

This he explained is why he was seeking collaboration with the French Government towards the development, exploitation and beneficiation of the State’s abundant mineral endowments to bridge the supply-demand gap, transfer of technology, diversification of the State income, job creation and poverty alleviation, as well as the reclamation of already devastated arable lands as a result of previous mining activities.

In specific terms, he sought support of the French Ambassador in facilitating grants, intervention funds, technical partnerships and investment linkages for the following minerals for which Plateau State is highly endowed.

Other areas of collaboration he said include education, culture and tourism, renewable energy, rural water supply, agriculture and much more, assuring that the State has various incentives that are attractive for business.

Ambassador Jerome Pasquier expressed delight on the Governor’s visit saying he had visited Plateau State last year where he held discussions with some State officials on various areas.

He assured that he will do his best to see that the necessary connection is created to assist Plateau State develop its mining potentials for the benefit of its citizens.

He assured the Governor that he was willing to not only involve Plateau State in many of his country’s development assistance programs, but will also facilitate investment connections and collaboration with investors who are willing to do business in Plateau State.

He said the French government is happy to support other peace initiatives such as the one being pursued by Governor Simon Lalong. Such determination he said will further entrench the fight against terrorism and criminality which is not just a Nigerian situation but a global concern.