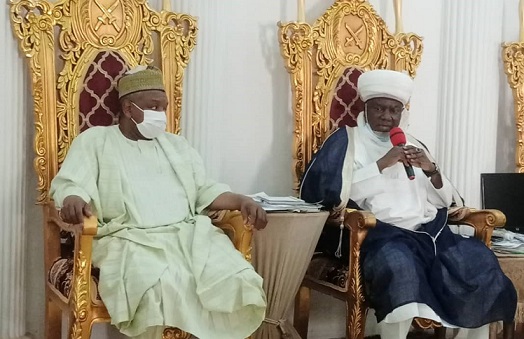 The Kebbi State Governor, Atiku Bagudu, was at the Palace of the Emir of Argungu, Alhaji Samaila Muhammadu Mera, to condole and sympathise with him and people of Argungu Emirate, over a trailer accident which occurred on Sunday night that claims seven lives with 48 persons seriously injured.

The Emir thanked the governor for all the support and assistance to the victims of the accident. The emir said ” It is gratifying to note that, each time people are bedevilled by one form of unfortunate situation or the other, the governor was always there for them, to show his concern over their plight.”

The Emir told the governor that, 48 passengers involved in the trailer accident sustained various degrees of injuries, while seven persons lost their lives.

He further explained that, one of the deceased was an indigene of Niger Republic and the trailer was also carrying assorted properties and livestock.

Mera however announced that, some of the victims had since been discharged from hospital and had since joined their families.

Hajiya Luba untill here demise she was the Principal of JSS Dankoji, Argungu.

The governor prayed God to give the deceased Aljannar Firdaus and the family, the fortitude to bear the lost.

The deceased aged fifty-five years, survived by her husband and six children.