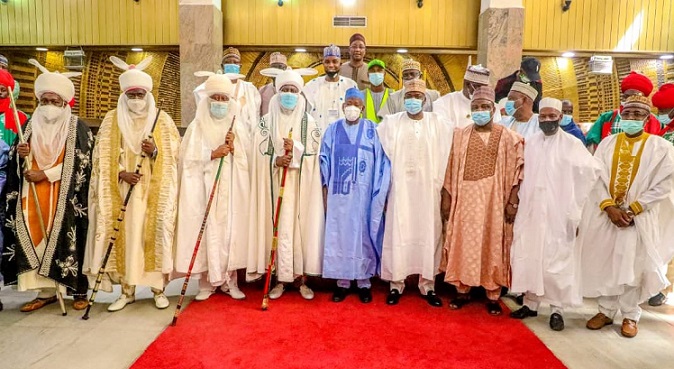 As part of the quick response to tame any possible effect of the 2nd wave of COVID-19, governor Abdullahi Umar Ganduje of Kano state met with all the five Emirs from Kano, Bichi, Rano, Karaye and Gaya Emirates, and assured them of government’s commitment towards the fight against the second wave.

He said, “Indeed COVID-19 is back and we have to also be back to fight it relentlessly. It is said that, if the going is tough only tough ones keep standing. We shall be tougher at all times, till when we put a halt to it.”

The Chief Press Secretary to the Governor, Abba Anwar in a signed statement, Wednesday, said the Governor, after reminding the royal fathers of their relevance and importance in the fight against the pandemic, he emphasised that, “We are starting these stakeholders meeting with you, because you are closer to the people at the grassroot.”

He urges them to go back to their respective Emirates and mobilise their subjects against the pandemic. Saying that, “You go and work closely with your District Heads, Village Heads, Ward Heads, Ulamas and other community leaders, to see that we deal decisively with this second wave. All hands must be on deck.”

While acknowledging that, there is problem of non-compliance from the part of the citizenry, but encouraged that, with advocacy and awareness creation campaign a lot could be achieved.

“We do appreciate the role being played by the leaders of other ethnic nationalities. Since in the first wave of this pandemic, we knew you did very well amongst your people. This is highly commendable,” he noted.

According to the statement, as shown by the State COVID-19 Response Update, “Kano is experiencing the gradual increase of COVID-19 cases. From 14th November 2020 to 17th January, 2021 additional 827 new COVID-19 cases were diagnosed, thus bringing the total cases in Kano to 2,636.”

Dr Sabitu Shanono, who stood and presented the statistics, as the Technical Coordinator of the Response Team, said “Over the last one week the sample positivity rate increased to 12.7% compared to the overall positivity of 4.2%. Number of cases on admission both home base care and hospital admission stand at 289.

“Another reason that shows how serious the second wave is, shows that, “A total of Seventeen (17) deaths were recorded between December and January, an incidence that we did not have since 15th July, 2020.

Parts of the challenges during the second wave experience, include, but not limited to, poor public compliance to protocols, low risk perception and poor cooperation by confirmed cases to self isolate themselves or even ne taken to isolation facility.”

But in order to squarely face the problem head on, governor Ganduje’s schedule of programs in the next 4 to 5 days, would be engagement with stakeholders. All in an attempt to tame the pandemic.

The statement revealed that Emirs were the first category he met with, who will be followed by Islamic scholars and Imams of Friday Mosques, then local government Chairmen. Others include, members of the National Union of Road Transport Workers (NURTW), members of the Amalgamated Commercial Tricycle and Motorcycle Owners, Repairers and Riders Association.

The stakeholders to also meet with the governor within the stipulated days include, Heads of Tertiary Institutions in the state and Heads of Academic and Non-Academic Unions. So also, Nigeria Union of Teachers, with some selected Head Teachers.

To cap it all, in the series of these stakeholders’ meetings, on Sunday January 24th, 2021, the governor will launch COVID-19 Marshals.

Chairman of the Kano State Council of Emirs, Emir of Kano, Aminu Ado Bayero, assured the governor, the total and unreserved commitment and unflinching support of all the Emirs and their subjects, in the fight against COVID-19 pandemic, as the second wave comes knocking on doors.