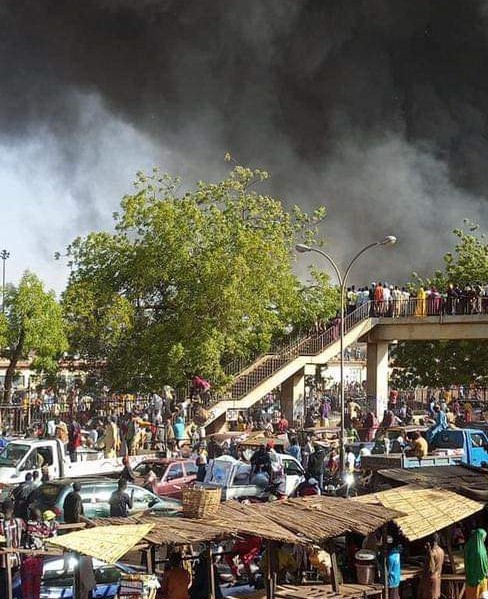 The Sokoto Central Market has been razed by a sudden fire outbreak which started around 5:00am today, Tuesday.

The cause of the fire which destroyed goods worth billions of Naira is yet to be ascertained. Half of the entire ancient Market which is second to none in old Sokoto state has been wrecked.

As at the time of writing this report lots of excavators were employed under the directives of the State Deputy Governor to make in ways for fire fighting vehicles to access the fire points in the Market.

Speaking to newsmen, the State Commissioner of Police, Alhaji Ibrahim Sani Ka’oje said he was in the Market area 5:30am with team of Policemen to ensure security around the market area.

Ka’oje told Journalists that, though the fire started late hours of the morning, there is no reported casualty among traders or firemen.

He said efforts are ebing intensified by the command to provide enough personnel to guard the Market even after the fire is brought under come control.

The State Deputy Governor, Alhaji Manir Mohammed Daniya who is seen busy running helter-skelter to provide make way for identified traders to squeeze in and rescue their wares.

Meanwhile, business and other commercial activities in Sokoto the state metropolis has been crippled because most of the trader’s own shops in the central Market

Governor Aminu Waziri Tambuwal who was also at the scene of the fire, described the fire incident as an act of God and prayed Allah to forestall the future occurrence.

He said a committee would be set up by the state government to investigate the remote causes of the frequent fire outbreaks at central Market.

It could be recalled that the Central Market which was rebuilt by the administration of former Governor, Senator Aliyu Magatakarda Wamakko was also consumed by fire some times in 2007.

The fire is still burning, 9 hours after.