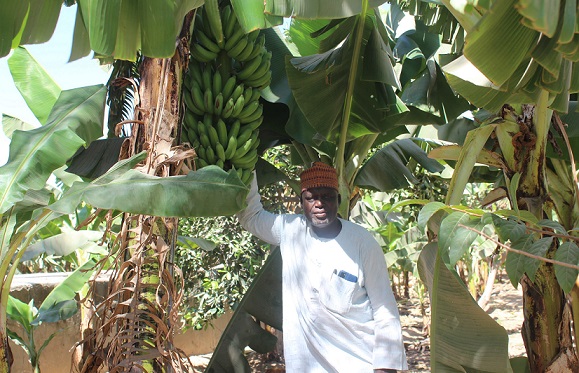 Kano is presently the most irrigated State in Nigeria, with more than 20 dams providing about 2 million cubic metres of water to support industrial and agricultural and activities to produce different varieties crops that can facilitate accelerated growth of the individual agribusiness sub-sectors.

One of such agribusiness that can contribute to the economic value of people is large scale Banana farming.

According to Wikipedia, Banana is the 4th largest agricultural product in the world following wheat, rice and corn. In 2016, world production of bananas and plantains was 148 million tonnes, led by India and China.

With a widespread demand for the crop, Banana farming is growing at a fast pace.

In Kano, Uba Idris Dogara Danhassan, a retired Customs officer has about 4.7 hectares of Banana plantation along KM 3.7 Karfi – Rano, road, Kano. From available records, he is the first to own a Banana plantation that size with over 25 people working on the farm.

He says the history of his Banana farming can be traced back to 1997 when he attempted fish farming following its introduction by Obasanjo farms. He constructed a concrete fish pond to start his own fish farming business.

Uba as he is popularly called explains that, for a concrete fish pond, every day the water is flushed out and replaced with a fresh on. To avoid wasting the used fish water which is highly concentrated with nitrogen, he decided to few plant trees by the outlet because banana needs lots of water to flourish.

In that process, he noticed many suckers sprouted by the side of each of the banana tree, he uprooted them and replant them, gradually, the banana trees increased in number.

He says when the banana was ready and he harvested, he had so much that he shared with his neighbors.

To start, he got a large piece of land, planted about fifty threes and managed them with the used fish water. With fear, he took his harvest to market for sale. In less than thirty minutes he sold everything and the money from the produce was far much more from what he was expecting and people were demanding for more……he got pleased with himself.

He says at this stage, he got convinced with the idea to go into banana farming.

To do so, he requires some training because Banana farming involves a lot of work, ranging from its planting, watering, weeding and the application of organic manure as well as removing its dried leaves to allow ventilation in the farm for its rapid growth and quality fruits.

Uba browsed the internet and learnt a few things about banana farming including fertilizers, climatic conditions, processing and banana species and varieties.

Uba has varieties of banana on his farm some of which are Musa acuminata, Williams (a banana of average height), Cavendish (are bananas fruits of cultivars belonging to the Cavendish subgroup).

He says haven browsed the internet and got some understanding, he decided to visit any country in West Africa that produces and exports Banana in large quantity. He traveled to Lum (a section of Cameroon that is blessed with Banana plantations owned by Europeans) near Daula in Cameron with his friend to get practical knowledge of Banana farming.

He has an established selling outlet, this is increasing by the day because of the high demand of banana from buyers who come from far and near to purchase the produce.

He says Banana processing in markets across the state is irregular, because of  poor sanitation.

Banana processing accelerates ripening at the same time, keep the high quality. An important ripening agent is ethylene, a gaseous hormone produced by many plants. Many synthetic analogues of ethylene are available, they allow many fruits to be picked prior to full ripening, which is useful since ripened fruits do not do well in transit.

Uba says he usually ripen his banana through the spray of ethylene and kept in a polythene bag for two days under controlled temperature before taking them to sales outlets.

His plan is to meet the high demand of Kano, Jigawa, Bauchi, Kaduna, Sokoto and Zamfara markets.

He has introduced the business to more than 25 friends and colleagues who are now into small and medium scale banana agrobusiness in different locations (Chiromawa, Garin Babba, Danbatta and Dawakin Kudu) in Kano.

He says his major challenge is acquiring a modern ripening chamber (Ethylene Generator Machine) and a containerized insulated truck with a thermo cooling system for safe delivery of his farm produce to any part of the country without damages.

Wonderful job, in fact very impressive, I was at the site of plantation witnessed it..The man need encouragement from government, individuals and other establishment, for he is doing a great work, proud of his humility and initiative, To the reporter or writer Kudos to you for the job Weldon, keep up the good work..,

Am agree with all what Mal uba said about banana farming.