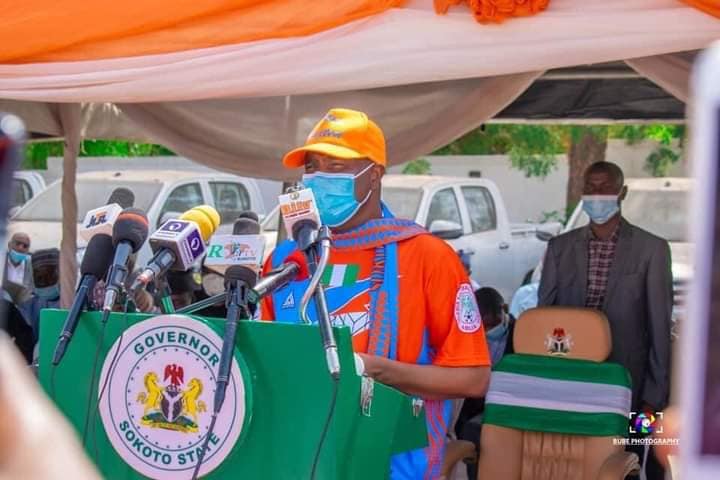 Over N11 million was realised on Saturday at the unveiling and launching of new branded jerseys for the Sokoto United Football Club (SU FC) under the Nigerian National league 2020/2021 season.

Governor Aminu Waziri Tambuwal also hosted the under-12 and the under-15 boys and girls handball teams, who won gold and silver medals for the state at the National Youth Games Competition held in Ilorin, Kwara State and the National Under-12 and 15 handball championship hosted in Sokoto last year.

The Governor handed out gifts of motorcycles and freezers to the boys and girls respectively as mark of appreciation.

In a press statement signed and made available to journalists in Sokoto by the Special Adviser on Media and publicity Muhammad Bello it was mentioned that Sokoto State Government and the Chief launcher, Alhaji Mukhtar Bello Maigona donated N5 million each while Abdullahi Shehu Foundation contributed N1million to the jersey launch.

Other co -launchers according to the release who donated various sums include local government councils, members of the state executive council and special advisers among others.

Speaking at the launch Gov. Tambuwal, who observed that the National Sports Festival is around the corner, appealed to the athletes to strive harder and make the state proud.

He said the launch and gifts were part of sustained efforts by his administration to support sports administrators and athletes in showcasing their talents at national and international sports arenas, urging both the SU FC (Caliphate Stars), the handballers, sports officials and supporters to be truly united and maintain their winning streak by garnering more trophies.

According to him, the SU FC “should work hard towards securing promotion to the Nigeria Professional Football League in the next football season.”

He assured that the state government will continue to improve the welfare of the athletes and their officials through the allocation and effective utilization of funds.

The governor urged resident companies, development partners and individuals to support the government through the sponsorship of projects, saying that government alone cannot shoulder all the demands of the athletes and youths in the state.

He added that the state government will continue to motivate the athletes to remain committed to practice, noting that this will encourage citizens of the state to indulge in physical activities.

He said his administration’s effort at developing sports is deliberate so as to fast track the achievement of the national development goals of healthy living, economic growth, sustainability and excellence.

He further said that his government is committed to the construction and rehabilitation of sporting facilities and infrastructure, citing the ongoing renovation of Giginya Memorial stadium and construction of an indoor sports hall and arena at Kasarawa.

Tambuwal maintained that the state government has also created linkages in the area of sports, education, health, capacity building, social and economic development for the people of the state.

In his address, the commissioner for Youth and Sports Development, Hon. Bashir Usman Gorau thanked the Governor for his support and cooperation to the ministry

Governors to Collaborate with KJPF

What is really going on along the Abuja-Kaduna-Kano Expressway?