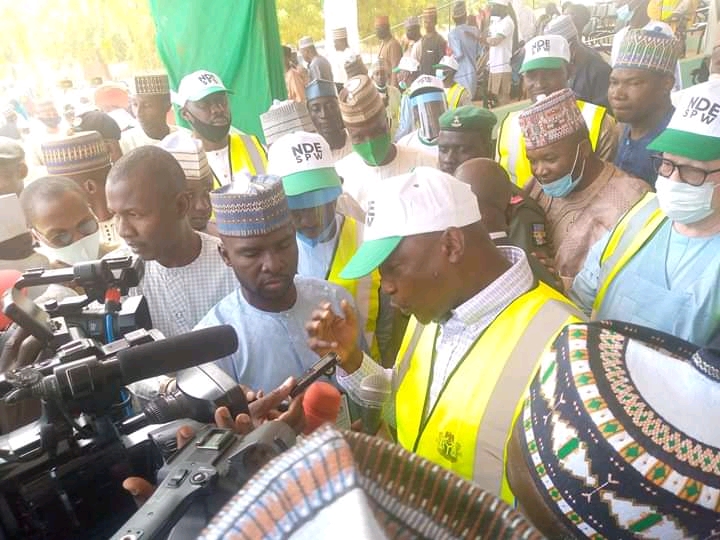 Attorney General of the Federation and Minister of Justice, Abubakar Malami, SAN said the extended Federal Government Special Public Works Programme of 774,000 jobs opportunities to Nigerians was part of deliberate efforts and conscious strategies to address the​ population of unemployed youths and rising insecurity in some parts of the country.

Malami stated this​ in Birnin-Kebbi at the flag off of the program, maintaining that the employment opportunities was part of strategies adopted to fast-tract the achievement of the Economic Recovery and Growth Plan (2017-2020).

He said the objective was to facilitate the creation of productive and inclusive societies in the country and shield the most vulnerable from passive hunger, poverty, environmental degradation and joblessness.​

The Minister said the program is being implemented in eight states of the federation with the target of immediately engaging 774,000 selected unemployed Nigerians to execute carefully selected projects across the 774 local government areas in the country.

He said 21,000 unemployed youth will benefit from the program in Kebbi State.

“I am convinced that the program will provide the necessary economic palliatives to these 774,000 unemployed youths. Added that the youth who diligently participate in the projects may deploy the knowledge and skills acquired to become self-employed.

However, the Minister enumerated several Federal Government intervention programmes to included N-Power program, Anchor Browsers which supported over 2000 rice farmers, conditional cash transfers, special loans for small and medium enterprises among others as part of efforts to radically transform the economic fortunes of the Nigerian masses.

He also said to appropriate working tools as well as protective wears have been provided for all the participants in their daily work schedule. Adding that supervisors have been appointed in all the electoral wards of the country to conduct supervisory roles to ensure effective monitoring of the program.

In his Remarks​ Govenor Atiku Bagudu represented by the state Commissioner for Local Government and Chiftancy Affairs, Hon. Hassan Muhammad shallah expressed his appreciation to the Federal Government for providing 21,000 jobs to Kebbi state, he said his administration is always ready to support
the laudable federal government job creation to youth and woman in the country.

He also commended the effort of the minister of justice for his commitment in bringing all the programs aimed at poverty reduction to the people of Kebbi.