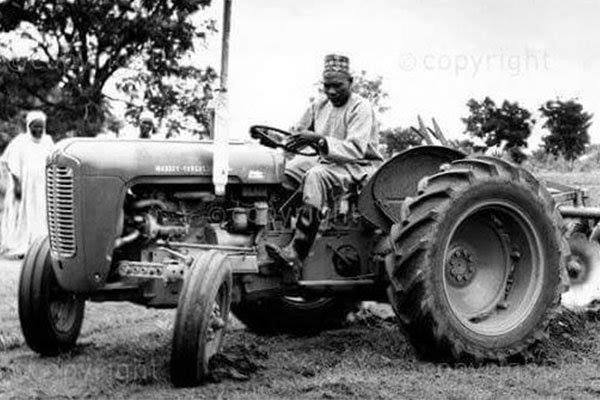 The last official public function of Nigeria’s first and only elected Prime Minister, Sir Abubakar Tafawa Balewa was the commissioning of the River Niger Bridge linking Asaba with Onitsha. After which;

“On December 19, 1965 he (Balewa) went to the small village of Arondizuogu in Orlu for the commissioning of Dr. Ozumba Mbadiwe’s “Palace of the People” Built by Italian contractors, it was a three-storey affair resplendent with blue terrazzo walls, swimming pool and a fountain, grand conference halls and event rooms, red carpet and gilt chairs.

All these in a village where most houses were still born of mud and thatched roofs. Since the first tarred roads were constructed in 1890s in Lagos, and the first dual carriage way in Nigeria – Queen Elizabeth Road – appeared in 1956 in Ibadan, no road in Arondizuogu or in Orlu had ever been graced with bitumen before. Yet Mbadiwe situated the grand palace there as a source of pride for his people.

At the commissioning ceremony, the Eastern Premier, Dr Okpara never saw the project as a white elephant planted by megalomania and watered by corruption, rather he hailed the project as “a great achievement for pragmatic African socialism.” The press placed the value of the house at least half a million pounds. Mbadiwe said it was “at most £40,000.” After the commissioning, Abubakar then proceeded to his farm in Bauchi for his annual leave.” The Prime Minister was briefly in Kaduna on Tuesday, January 4, 1966 before returning to Lagos.

Despite the fact that Sir Balewa was a Knight Commander of the Order of the British Empire and member of the Privy Council of the United Kingdom, he was a modest person who had throughout his life led a Spartan and ascetic lifestyle. He owned only 2 private residences in Bauchi and Kaduna and a 50-acre farm near his hometown of Tafawa Balewa. His personal integrity was unassailable, yet in Lagos as Prime Minister he headed a government that glossed over the proven corrupt practices of its apparatchiks for the sake of political expediency;

“The NCNC parliamentary leader and Minister of Trade, Dr. Ozumba Mbadiwe was caught using his office to divert a government land at Ijora Causeway to his private company Afro Properties and Investment Company since 1961. He then assigned the land lease to Nigerpool in return for a hefty annual profit.

The discovery generated another media-exposed corruption scandal. The Prime Minister met privately with Babatunde Jose, the editor of the powerful Daily Times spearheading the intense campaign to remove the corruption extremist if he declined to resign.

Mbadiwe never bothered. Sir Balewa told the editor: “You want me to remove this man? What he did fell below what is proper. Under British standards, he would go, but the NCNC who put him in my original coalition are solidly for him. Its central working committee had just passed a unanimous vote of confidence in him. If they withdraw, since Awolowo can’t join, the [coalition] government will collapse.’”

No doubt during the First Republic there were numerous signs and symptoms of rapid democratic decay against the background of massive political corruption. The bloody events of January 15, 1966 did not just happen in some vacuum.

By January 15, 1966 our nation was a disaster waiting to happen as there was a noticeable build-up towards chaos as noted by declassified US diplomatic cables which clearly stated how our nation had got to a level of; “Very complicated African politics, in which tribes, religions and economics all play a part, are involved in the situation. The Northern Premier is at odds with the Eastern Premier in whose region large oil deposits have been discovered. In the heat of the election campaign, there have been threats of secession by the East; threats of violence that would make Congo look like child’s play.”

The American cables were about the intense political rivalry at the highest echelons of government;

“Following the controversial Federal Election of December 1964, ceremonial President Azikiwe of the NCNC, refused to invite Prime Minister Balewa of the NPC to form a government and issued orders mobilizing the Army to enforce his authority to suspend the government, annul the elections and appoint a temporary interim administrator to conduct elections.  However, the oath of allegiance of the officer corps was not only to the Commander in Chief but also to the government of Nigeria.

The Army Act (#26 of 1960) and the Navy Act (#9 of 1960) were also clear on lines of authority and control. While the Army and Navy were “under the general authority” of the Defence Minister in matters of “command, discipline and administration”, the authority for operational use and control was vested in the Council of Ministers and the Prime Minister.  President Azikiwe and the service chiefs were so advised by the Chief Justice and Attorney General of the Federation.

Thus, the Navy Commander, Commodore Wey politely told the President that the Navy (under him), the Army (under Major General Welby-Everard) and the Police (under Louis Edet) had decided to refuse his orders.   After a week of cliff hanging tension, in which the military stood aside, a political compromise was eventually reached and a government of “national unity” formed under Prime Minister Balewa.” Was Dr. Azikiwe privy to the January 15, 1966 coup?

There was also the political collateral damage of;

“Operation Banker’, a joint Army-Police operation in the Western region, led by then CO, 4th battalion, Lt. Col. Maimalari, allegedly at the behest of the pro-NPC regional Premier (Akintola) culminating in the declaration of a state of emergency in May 1962 after a fracas in the House of Assembly and the appointment of an administrator. Interestingly, the General Staff Officer at the Army HQ in charge of Intelligence was none other than Captain Patrick Chukwuma Nzeogwu who, as a Major, was later to play a key role in the coup of January 1966 in which Maimalari lost his life.”

This politicization of the military led to;

“The arrest on September 22, 1962 and subsequent imprisonment of the opposition leader, Chief Awolowo, on suspicion of planning a civilian overthrow of the government.  It was alleged that 300 volunteers were sent to Ghana for 3 weeks militia training.”

Interestingly; “The last interview granted to the magazine ‘West Africa’, by the late Prime Minister Balewa on January 14, a few hours to his death, went like this:

Question:  Do you see the solution as taking the form of a coalition government in the West?

Balewa:  Yes, it would have to be that …The Action Group has accepted my mediation, but the NNDP has asked for more time. If I use real force in the West – and make no mistake about it, I haven’t yet – then I could bring the people to their knees.  But I don’t want to use force like that.  Force can’ t bring peace to people’s hearts.

Question:  Would you consider the release of Chief Awolowo as part of a political solution of the West’s troubles?

Balewa:  I think that might be part of it; yes, obviously we would have to see.

This interview was not published until January 29, 1966.”

Little did Sir Balewa know that the political end game of the January 15, 1966 mutineers was to release then opposition leader, Chief Awolowo from Calabar prison and install him as head of a national unity government. Chief Awolowo has never confessed to being privy of the coup attempt though the official documents containing the details of what actually happened and how 54 years ago are still classified.

May the souls of Sir Balewa and that of all those that lost their lives on January 15, 1966 continue to rest in peace