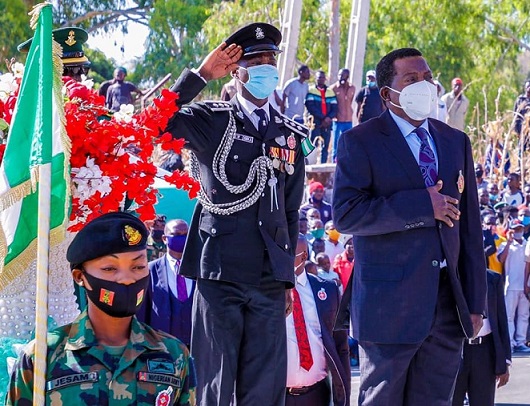 Governor Simon Bako Lalong on Friday 15th January 2021 led other dignitaries to lay wreaths at the tomb of the unknown soldier located at the arcade by the Joseph Gomwalk Secretariat in Jos.

This was contained in a signed statement by the Director of Press & Public Affairs to Lalong, Dr. Makut Simon Macham.

Addressing the event attended by top Government officials and security heads in the State, Governor Lalong praised members of the armed forces for their sacrifices in protecting the territorial integrity of the country and intervening in domestic security.

Lalong said the sacrifices of the fallen heroes must not be left to go in vain as they gave their all for the security and safety of the citizens.

He said “let us continue to support our armed forces who are still in active service through every means as they deserve our love. We should avoid condemning them over challenges that could arise in the cause of their duties. They are slefless and have done alot to restore security in many areas particularly in Plateau State. We are grateful for their contributions and continue to pray for their souls to rest in peace”.

Lalong assured that the State Government will continue to support members of the Nigerian legion and their families through empowerment and related programs.

According to the statement, the Governor Lalong appreciated all the security agencies and their families who continue to collaborate with the State Government in consolidating the peace and security of Plateau State.

Prayers were also offered for the repose of the souls of those who died in the service of the nation.

The Governor later attended a reception at the Rhino Officers Mess of the Maxwell Khobe Cantonment, Rukuba Barracks.