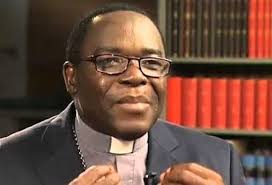 Ask Bishop Matthew Hassan Kukah and all the groups and persons that have been lying and maligning President Muhammadu Buhari of engaging in nepotism in his appointments to list the appointments made by Presidents Olusegun Obasanjo and Goodluck Ebele Jonathan, and compare them with the ones made by President Buhari, both on regional and religious basis, and you will meet a brick wall.

They wouldn’t go there, and that’s because they know they don’t have a case against this President, and that’s also because they know that they are flat out liars simply out to overheat the polity, cause disaffection, promote the ethno-religious polarizations they’ve always promoted, and then cause massive distractions from the massive infrastructural developments being achieved with little revenues by the Buhari administration in comparison with the near zero projects executed by their favourite administrations that plundered Nigeria during their 16 years of oil boom.

Just to be sure, and for you to erase any doubt about what I said about nepotism above, ask Bishop Kukah or anyone around you holding the same “false gospel” of nepotism against President Buhari to name the regional or religious identities of the top appointments made by Presidents Olusegun Obasanjo and Goodluck Ebele Jonathan, and watch their reactions or responses.

They wouldn’t give you the answer, but would rather engage in other diversionary responses. And that’s not as if Obasanjo and Jonathan were Presidents in the 12th Century, such that you needed to check some encyclopedia or history books to draw your answers from, but purely because they willingly sold themselves to lies and have become shameless liars for the simple reason of attacking and maligning a man they never ever pardoned for upstaging the very sleazy regimes they felt were of filial relationships with them, and which they supported with all their hearts and might’s, even at the expense of the country’s growth and prosperity.

And, sadly, they are being aided by either a complicit press or a press too lazy to rebut them with facts or data that are just within the range of the last 21 years, and which are cheaply available in any newspaper library or archive.

Otherwise, how could a group of carefree rabble rousers successfully pollute the entire nation’s atmosphere with lies about a non-existent nepotism now whereas we all know the era nepotism was practised with impunity, or have they crafted a new meaning for nepotism without duly educating the nations of the earth of the new meaning they concocted?

But then, to be fair to the press, not all of them are complicit in those lies or lazy to rebut these perennial liars with data that prove they’ve always been lying whenever they shamelessly shout that Buhari is nepotistic in his appointments.

This report was published at a time the perennial liars were again up with the same nepotism lies, but ever since it was published till this day, they’ve not denied what the newspaper published nor did they publish any counter data, which exactly proves that they know they don’t have any case.

But since they are a bunch of morally challenged lot, they kept on singing the same song of lies till this day, which pointedly means they are deliberately doing it to blackmail the administration, to maliciously paint it in very dark colours, and to also cause huge distractions from the administration’s monumental achievements in infrastructure and the economy, in exact fashion with the modus operandi of bandits and “Boko Haram” insurgents.

As proof of him being a mercenary of distraction, just checkout the fact that Bishop Matthew Hassan Kukah came out with his epistle of lies a few days after President Buhari commissioned a new gas plant in Edo State, and after some notable critics of his administration were seen boarding and enjoying a train ride on the Lagos – Ibadan rail line built by his administration, among many other such projects successfully started and completed, with majority of those signature projects sited in southern Nigeria.

And with all available facts and data proving that Buhari’s appointments and projects are mainly cornered by southern Nigeria, shouldn’t it be northern Nigerians, especially the Hausa/Fulani Muslim stock that Bishop Matthew Hassan Kukah and his fellow travellers in bigotry hold in great contempt, that should be crying of nepotism or marginalization against the Buhari administration for rewarding the South instead of rewarding their unprecedentedly large votes that birthed the administration?

Unless Bishop Matthew Hassan Kukah and his fan base are pseudo-intellectuals or a gang of mischievous people, why couldn’t they choose to enrich their souls and brains with data about the regional distribution of projects, which are even more important than appointments, rather than disturbing the peace and corporate stability of Nigeria with lies about nepotism in appointments – appointments which even the North is severely short-changed?

The fact that the North isn’t raising dust over the concentration of appointments and projects in southern Nigeria by the Buhari administration is simply a demonstration of their maturity and tolerance, which can also be proven by the peace Bishop Kukah enjoys in Sokoto in spite of his persistent efforts to demonize Muslims and their faith, or can Kukah or anyone else in his fan base point at any predominantly Christian State in the country where a Muslim cleric can be consistently demonizing the Christian faith, painting them as coupists and hegemonists, and remain unharmed without gunmen or kidnappers taking him away and dumping his corpse in some pond?

If we are to talk of nepotism, why shouldn’t we talk about the fact that Muslim clerics who openly criticised the Buhari administration have been known to be invited and questioned by the DSS whereas lots of hatemongers masquerading as Christian clerics who persistently hurl childish tantrums and insults, and even death wishes, on President Buhari have never ever been invited for questioning, much less arrested and tried for hate speech and intent for assassination or murder of the President and Commander in Chief of the Armed Forces of the Federal Republic of Nigeria?

Is that how nepotism works, or are Buhari’s accusers simply exhibiting their extremely hollow and shallow quality of thought, exactly how we have always thought them to be?

Well, in conclusion, if there is any iota of integrity or fabric of honour in Bishop Matthew Hassan Kukah’s soul and character, he doesn’t need anybody’s prodding to have him resign his membership of the National Peace Committee.

He has compromised his membership of that noble committee by making himself a part of the conflicts and problems that needed to be resolved in the country, otherwise, how could any group seeking mediation with another group see Bishop Kukah among the mediators, and then trust him as a fair mediator when they’ve always seen and known him as a partisan conflict entrepreneur? Moreover, genuine peacemakers just wouldn’t choose a joyful season like Christmas to foul up the atmosphere of bliss with lies cooked up to foster the ethno-religious divisions created by rogue politicians and rogue clerics in time past like Kukah just did this Christmas.

And unless he is a preacher of what he doesn’t believe in or he is a commercial social critic, as many suspects, he should just quit that committee and set up a bee shop to be selling bees, for it is better to be stung by a bee and you know it’s a bee than to be stung by a bee masquerading as a butterfly.