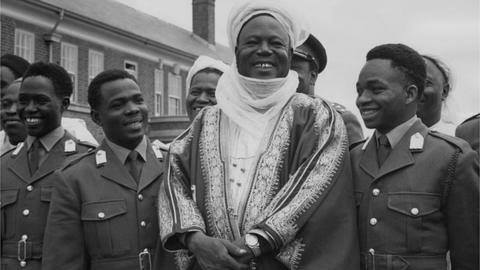 I have never had the rare honor and singular privilege to have met this talented Nigerian in person. There is actually no need to because his writings surfeit. Very witty and often satirical, no Buharist has had his consistency and dedication. I give it to Dr. Egboju – he is a quintessential Nigerian who wants the best for his nation. His tenacity in the political defense President Buhari is so admirable even when one disagrees with him most of the time.

Few including political appointees compare with Ugo’s loyalty which is so unquestionable to his political hero. Such tenacity is admirable albeit naive. Unfortunately, in defending Mr. President, Ugo has often been fantastical to the levels of absurdity.

I therefore had to do a double check when I stumbled upon Ugo’s intervention on the 37 newly promoted Police Commissioners in the nation. Recall there were 12 from the NW, 8 from the NE, 4 from the NC, 7 from the SW, 5 from the SS with just 1 from the SE.

Anyway, I have used an old picture from the First Republic to illustrate how historically proactive the Northern leadership has always been compared to the South’s intelligentsia in mentoring even at the officer cadet level abroad.

I am neither surprised nor disappointed at Ugo’s “wailing” on December 27, 2020 because I used to be an entrenched Buhari loyalist myself.

My emancipation however came as early as October 1, 2015 at The Platform. An event that took place at Civic Center in Lagos where Matthew Hassan Kukah delivered a presentation entitled; “Hysteria, Euphoria and Amnesia: Nigeria’s Long Walk to Freedom”

The scales fell off my eyes. I was stunned at the big picture of the fundamental issues in Nigeria which Kukah had contextualized. You can Google it, significantly is also Kukah’s YouTube video of “The Platform 2016: Healing A Traumatized Nation”

Is Ugo Egboju also on the Road to Damascus?

Let the young man speak for himself;

You make 37 new commissioners of police and a certain region gets only one.

If you ask policemen to write exams before these promotions that region might top many other regions.

How then do you make top promotions and not give them an equitable share?

You do these things and feed bigots with red meat.

And justify hoodlums and their logic.

If these other zones are now so smart, they get the lion share in appointments at high cadres what then are we still doing with quota system and federal character?

But one Nigeria should be a Nigeria where no Nigerian should have an advantage over another Nigerian by virtue of where he comes from.

I know many Igbos who switched states and took Arabic names to write NDA exams.  They sought the privilege of lower cut offs in some states.

In the alternative, let us give the regions near autonomy.”