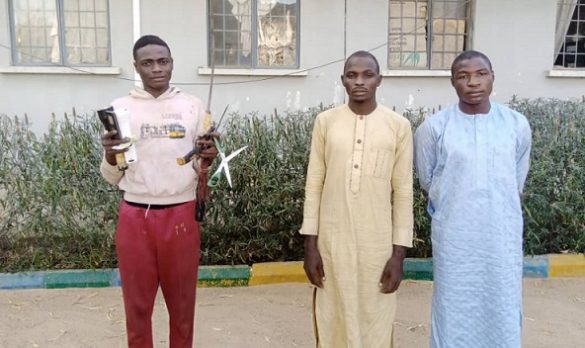 In the Command’s determination to rid Kano State of all forms of crimes and criminality, including thuggery (Daba) and Drug Abuse, on Monday, a Team of Operation Puff-Adder, led by SP Nasiru H. Gusau, while on surveillance patrol along Gwale Quarters Kano, arrested one Halifa Bala, 20 years old, of Sani Mainagge Quarters, Gwale LGA of Kano State.

The Public Relation Officer (PPRO), Kano State Police Command, DSP Abdullahi Haruna in a signed statement, Tuesday, said the suspect was nabbed in possession of a Long Sharp Knife, 2 Scissors, 2 Torchlights, a Hammer and 2 Mobile Phones. During interrogation, the suspect freely confessed carrying out series of House Breaking and Snatching of Mobile Phones.

He revealed he has been robbing people and snatching Handsets for over two years at Dorayi and Sani Mainagge Quarters.

The Command’s Commissioner of Police CP Habu A. Sani, psc, directed that the case be transferred to the Criminal Investigation Department (CID) of the Command for discrete investigation, he added.

In another development, one Hajiya Rabi Umar of Galadanci Quarters, Gwale LGA of Kano State, reported that one Dini Abdullahi of Gwale Quarters Kano, used sharp animal horn to stab her 22 years old son, Ahmad D. Ahmad on his chest, face and neck, and took away his N200 and fled to unknown place.

Ahmad was rushed to Murtala Mohammed Specialist Hospital, Kano, for treatment. The Command’s Commissioner of Police CP Habu A. Sani, psc, raised and instructed a team of Operation Puff-Adder, led by SP Nasiru Gusau, to arrest the culprit. The team immediately swung into action and arrested the suspect, one Dini Abdullahi, 20 years old of Gwale Quarters, the PPRO said.

The PPRO confirmed in the statement that the suspect confessed to have committed the crime, disclosing he is an addict of intoxicating drugs, such as Indian Hemp and Diazepam Tabs.

The suspect will be charged to court after investigation is completed.

That’s the essence of synergy. Communities need to support the authorities as the security for all is the concern of all.