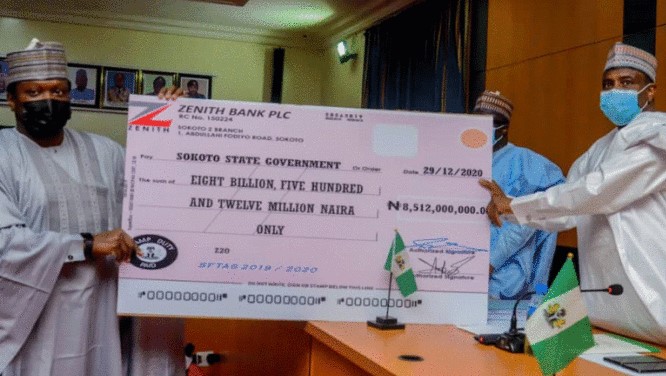 Sokoto state Governor, Aminu Waziri Tambuwal has directed the accelerated promotion of members of the State Fiscal Transparency, Accountability and Sustainability (SFTAS) Program report team who are not on consolidated salary structure.

Stallion Times reports that World Bank gave Sokoto State Government grant of $22 million for its commitment to the implementation of the State’s Fiscal Transparency, Accountability and Sustainability (SFTAS) program.

The State Commissioner of Finance, Hon Abdussamad Dasuki also donated hundred percent of his Salary for January, February and March to Abubakar Tulluwa the Plant Operator of the Ministry for his dedication and commitment to duty.

The commissioner made the disclosure at a dinner to appreciate the wonderful performance of the state SFTAS team efforts that earned the state recognition and Financial Grant from the World Bank.

He said the State Government is very much appreciative of their teaming efforts in the management of the state finances despite the effect of the Covid – 19 Pandemic.

Dasuki further said in the year 2020, the state Ministry of Finance under his leadership conducted a series of reforms aimed at ensuring prudent and sustainable financial management of the state meagre resources.

“The reforms have yielded positive results due to commitment and hard work of the state SFTAS team, not minding criticism by those who do not wish the state well,” Dasuki said.

He said the salary donation to the plant operator was made to appreciate his diligence and commitment to duty and as well to serve as moral booster to other staff of the Ministry.

“Accountant General take note, I donated my January, February and March Salary to Abubakar Tulluwa as a mark of honour and recognition for his punctuality, commitment and dedication to duty,” the commissioner stated.

He said Tulluwa has never been found wanting at his duty post and was always available to provide needed services to the ministry.

He thanked the state Governor Aminu Waziri Tambuwal for providing needed support to his Ministry in its quest to properly manage the state meagre resources.

The commissioner explained that the state government has provided tax relief to its citizens with a view to mitigate and cushioned the effect of Corona virus pandemic in their homes and businesses.

They further assured the commissioner of the SFTAS team absolute loyalty in his effort to transform the ministry and its workforce.

They called on financial officers in the ministries and extra ministerial departments to brace up for the task ahead, saying that the reform exercise is a continuous process and no stone would be left unturned.

A public finance Management Consultant Mr Gbenga Oyewole who is supporting the reforms said he would continue to support the state Government until it actualized the second face of its reform exercise.

“You should do more to sustain the reform in future and there is always room for improvement,” Oyewole said.