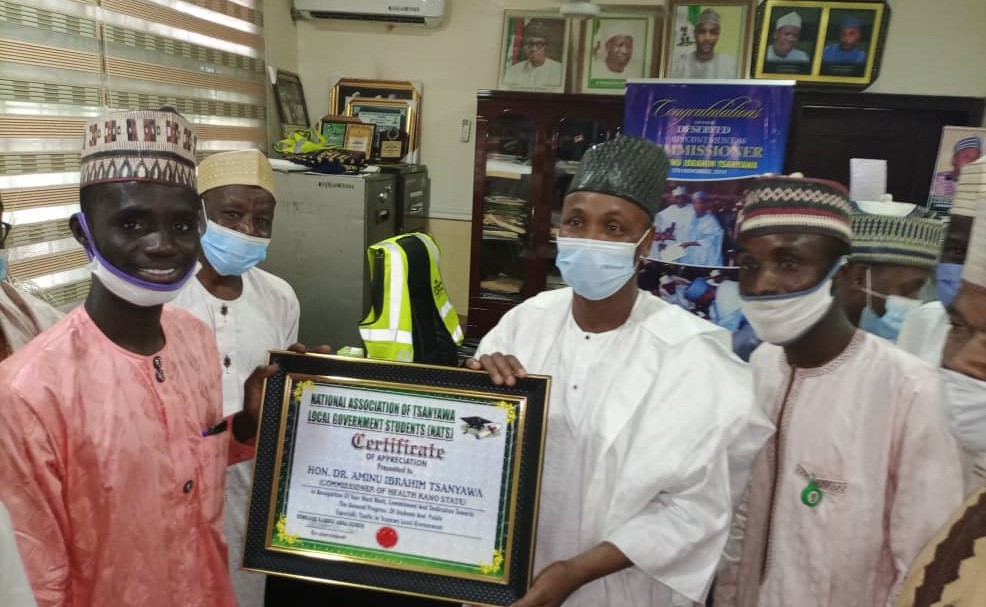 Kano state Commissioner for Health, Dr. Aminu Ibrahim Tsanyawa, has been described one of the great pillars for the development of education in Tsanyawa Local Government area.

This assertion was made by the President of the National Association of Tsanyawa Students Union (NATSU), Comrade Kabiru, while presenting an Award of Excellence and Certificate of Appreciation to the Commissioner for his outstanding role in supporting education in the local government.

Information Officer, Ministry of Health, Hadiza Mustapha Namadi in a signed statement, Monday, quoted Comrade Kabiru saying “Dr. Tsanyawa is well known for his passion and zeal to extend helping hands to students of the area studying at various institutions in the state and beyond.”

He noting with satisfaction the timely intervention of the Commissioner to Tsanyawa students who were victims of flooding in their hostels.

According to the President, surprisingly Dr. Tsanyawa visited to sympathize with them over their predicament, adding that he impressively supported them with foodstuff and other essentials to ease their sufferings.

Comrade Kabiru further stated that the Commissioner henceforth directed for the repair of faulty electrical wiring of the hostel, an intervention the students are still benefitting from.

He maintained that this and other interventions of the Dr. Tsanyawa to the students of Tsanyawa local government gingered them to honour him in recognition of his outstanding supports whenever the need arises.

Comrade Kabiru then enjoined other personalities in the local government to emulate Dr. Tsanyawa in sustaining the development of education of their locality.

According to the statement, the awardee, Dr. Aminu Ibrahim Tsanyawa, thanked the Association for recognizing his contribution and see it worthy to be honoured.

He maintained that he was particularly happy being that he is not above all in the area, yet he was chosen and honoured, noting that this showed that whatever anyone is doing in a given community, good or otherwise, he is being watched.

The Commissioner expressed delight for the level of rapid development Tsanyawa local government is witnessing nowadays, pointing out that the level of student’s enrolment in tertiary institutions has significantly improved.

Dr. Tsanyawa said that he was proud of the Association and people of Tsanyawa and Kunchi local governments, pledging to continue doing his best to uplift the standard of education and wellbeing in the area, the statement concludes.

Kudos to all the Youths in Politics