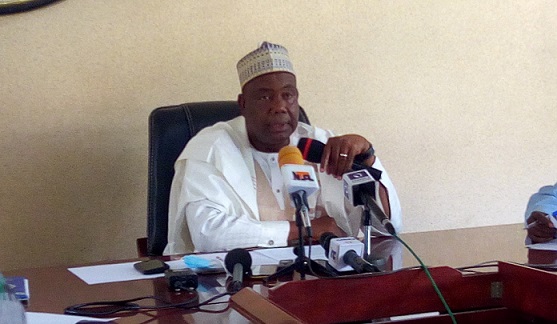 The budget which is designed to improve the well-being of Kano citizens was tagged “Budget for Economic Recovery and Sustainable Development” has a total size of 147,935,302,947b

Below are breakdown of amount earmarked for each sector in the 2021 approved budget.

Dankadai says government has placed special priority to the education sector considering its significance towards the upliftment of the people of the state, therefore, government is planning to spend a total sum of 45.6b representing 25.68% of the total budget size.

The Hon Commissioner says the provision of urban and rural roads is a major requisite to attaining economic growth and development as enshrined in Kano State Development Plan.

He also says the ongoing program of rehabilitation and renewal of major urban roads and infrastructure, construction of new roads and under-pass bridges are testimony of government’s commitment in that direction.

The Hon Commissioner says to further consolidate government’s investment in the urban infrastructural development, the sum of 1.2b is earmarked in the 2021 fiscal year.

To ensure food security and sufficiency as well as employment to the rural populace, Dankadai says the sum of 8.7b is set aside for various programs and projects in the sector.

The Hon Commissioner says, since the inception of the present administration, it has continuously shown utmost concerns towards the sustenance of healthy environment. To do more, the sum of 1.1b is earmarked for the execution of various capital projects in the state.

Hon Dankadai says the state water supply system is managed by a number of different organizations and agencies. These includes Ministry of Water Resources which is responsible for policy formulation, coordination and planning. Kano State Water Board (KSWB) which is responsible for water supply service delivery in urban and semi-urban areas while the Rural Water Supply and Sanitation Agency (RUWASA) is mandated with the provision of water facility and sanitation across rural settlements.

The sum of over 9b is earmarked on various water schemes across the state for the fiscal year.

THE Commissioner says to further consolidate investment in the rural infrastructural development, the sum of 6b is approved for the 2021 fiscal year.

According to the Planning and Budget Commissioner, government is committed to the implementation of road map to improve healthcare delivery in the state.

He says to achieve this, government intends to spend the sum of 16.4b representing 17.46% of the total budget size for various programs and projects in 2021.

Ministry of Works and Infrastructure

Dankadai says as a result of economic meltdown coursed by the Covid-19 pandemic, serious changes and adjustments have been made in line with government policy and commitment in order to face reality in the implementation of the 2021 budget; the sum of 14.7b is set aside for the ministry and its agencies for the execution of various projects.

Ministry of Housing and Transport

He says the idea was developed to promote transportation system which will attract more investors and easy movement of products within and outside the state; the Ministry is allocated the sum of 3.5b for the fiscal year.

The Hon Commissioner says Governor Ganduje is committed to the rapid resuscitation of commerce and industrial activities in the state, this is to cushion the negative effects on the state economy occasioned by Covid-19 pandemic; 139m is earmarked for various project and programs for the sector.

Ministry of Tourism and Culture

Dankadai says the cardinal objective of the present administration is to boost revenue and accelerate economic development; this new ministry has been allocated 219m for various programs and projects

According to the planning and budget Commissioner, in an effort to sustain effective justice system in the state through the promotion of human rights, fight against corruption and improving business environment, government has approved to expend the sum of 9.1b for various interventions in the sector.

Fielding questions from journalists on why government felt it necessary to review upwards the approved budget by 30,001,427,593b amidst the Covid-19 meltdown, Dankadai says the upward review was done by the KHoA for the common good of the state after considering some critical aspects of development in the budget.

Journalists called for the budget performance briefing at the end of the fiscal year.

The Hon Commissioner, Ministry of Planning and Budget while being optimistic of government’s commitments to the implementation of the 2021 budget, thanked Governor Ganduje, Members of the Executive Council, Public Servants and citizens for their support to the ministry.

Commenting on the 2021 budget briefing, a Kano based civil society advocate, Comrade Akibu Hamisu observed that increasing the budget size will affect the scientific projections which in turn will pause the budget realism efforts considering the present economic recession caused by Covi-19.

Comrade Hamisu recommends that the state should be consistent in maintaining fiscal economic update projection for realistic budget estimates and implementation.