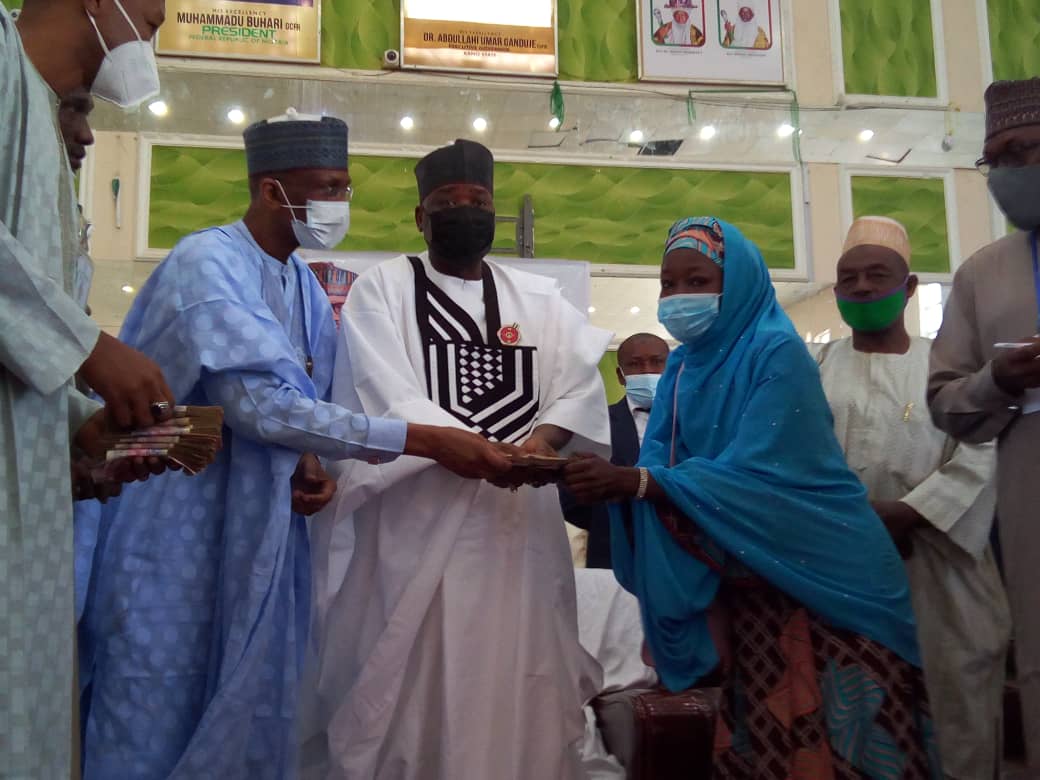 The National Social Investment Protection Program (NSIP) has disbursed 16 million to 8000 women in Kano under the Grant for Rural Women Program (GRWP).

Speaking at the flag-off of the grant in Kano, Monday, the Hon Minister, Humanitarian Affairs, Disaster Management and Social Development, Hajia Sadiya Umar Farouk who was represented by the Permanent Secretary of the Ministry, Bashir Nura Alkali said the NSIP is adjudged as the largest social protection program in Africa with over $1billion earmarked annually to cause positive changes in the lives of the poorest and most vulnerable in the country.

She said the GRWP was introduced in 2020 to sustain the social inclusion agenda of the President Buhari’s administration adding that, it is consistent with the national vision of lifting 100 million Nigerians out of poverty in 10 years.

According to the Hon Minister, “the program is designed to provide one-off grant to some of the poorest and most vulnerable women in rural and peri-urban areas of the country.”

“Our target in Kano State is to disburse the grant to over 8,000 beneficiaries across the 44 local government areas. The grant is expected to increase income and productive assets of the target beneficiaries.”

She believes that with the complementary efforts of Kano State Governor, Dr. Abdullahi Umar Ganduje , the beneficiaries will make good use of the grant to contribute towards improving their living standard and be on their way out of poverty.

Over 12 million households have benefitted from the NSIP interventions in the last 5 years in the form of monthly Conditional Cash Transfer (CCT) of N5,000 to 1 million indigents to protect them against economic shocks and elevate them out of poverty, the Minister said.

She also said the N-Power program provided temporary income generating opportunities for 500,000 unemployed youths while 8,612,457 primary pupils in public schools are receiving one meal per day under the National Home-Grown School Feeding Program.

Kano State Executive Governor, Dr. Abdullahi Umar Ganduje who was represented by his Deputy, Dr. Nasiru Yusuf Gawuna appreciated the President Muhammadu Buhari for creating the NSIP because it touches the hearts of people leading to the most desired human development.

Appreciating the NSIP, Ganduje said: “We doff our hats for the Hon Minister and members of her ministry for standing firm and making sure that the most vulnerable people are the ones that stands to benefit from these programs.”

Kano state government on its part has done similar empowerment programs particularly to do with women and youth. In it, 80% that relates to women were successful. This is because when a woman is empowered, the whole household is empowered.

Under the Government Enhancement Program (GEEP), Ganduje called for additional beneficiaries of the loan, that is, the trader money, market money and farmer money in the next round of the program, adding that Kano state needs 88,000 beneficiaries, 20,000 per Local Government Area.

Under the National Home-Grown School Feeding Program, he called for the update of enrolment because the state policy statement and implementation of the free and compulsory education has caused the number to triple of the years.

On the N-Power program, he said Kano state has the highest number of applicants with over 200,000 registered applicants and appealed for the Minister to fast track the enrolment process in that regards.

Governor Ganduje revealed that Kano state government will soon empower 1,700 youths and women including people with disabilities with over N3 million under the Agro Processing, Productivity Enhancement and Livelihood Improvement Support (APPEALS) Program.

APPEALS is a six-year project developed by the Federal Ministry of Agriculture and Rural Development (FMARD) in collaboration with the World Bank and other stakeholders.

Governor Ganduje then urged beneficiaries to utilize their grants to improve their livelihood.

Hussaina Yakubu from Gyadi-gyadi section of Tarauni LGA is one of the beneficiaries, she thanked the state government and the NSIP for the kind gesture promising to invest the money into her sewing business.