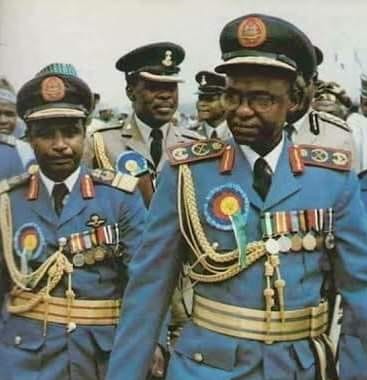 Exactly 37 years ago today, a duly elected and sworn-in President and Commander in Chief was removed from office through unconstitutional means by a notorious cabal of prolific coup artisans.

Agreed, the 2nd Republic had its challenges. The fundamental issue at stake is however a pertinent question: was a military coup the best way forward back then? If yes, it begs a further question if such a remedial measure is still relevant in the 4th Republic which is also undergoing similar problems. If no, then we must increasingly deepen our democratic tenets by accommodating constructive criticism and debating contrary opinion.

President Shehu Shagari and Vice President, Alex Ifeanyichukwu Ekwueme were both arrested, detained and thoroughly investigated. Not an iota of evidence of corrupt enrichment nor scintilla of abuse of office was found against them.

The military cowboys that terminated the Shagari/Ekwueme administration were not in the least interested in embarking on any corrective measures beyond perpetuating themselves. Ibrahim Babangida Badamosi after 8 years had to be forced out. Abacha 5 years down the line wanted to succeed himself.

Buhari after nearly 2 years rhetorically asked; “Is it not more profitable to devote our time now to the task of restoring sanity and making life more tolerable for our people than the academic exercise of drawing up a timetable for the return of power back to those who have brought us to this economic and social precipice?”

Only Abdusalami Abubakar Alhaji delivered. He crafted a new constitution, organized elections and handed over to a democratic dispensation still operational to date – all in less than one year!

Back then the core North and Middle Belt were bed fellows. So as at December 31, 1983 all the GOCs were Northerners – Anthony Haladu Hannaniya, Muhammadu Jega, Muhammadu Buhari and Zamani Lekwot. So were the Defence, Army and Air chiefs including NSA. Shagari’s commander, Brigade of Guards, Directors Military Intelligence (DMI) and Nigerian Security Organization (NSO), Lagos Police CP and the GOC, Second Division overseeing Lagos were specifically from his home state of Sokoto.

The coup finances were handled by Colonel Mohammed Aliyu Dasuki, head of DMI and his brother in-law Major Sambo Dasuki, military assistant to Wushishi. Dasuki is also a brother in-law to Malam Mamman Daura, the leading ideologue of “Kaduna Mafia” which master minded the coup.

Margaret Thatcher received a 4-page letter dated January 6, 1984 from Dodan Barracks signed by Major General Muhammadu Buhari. The letter communicated the reasons why democracy was truncated by the military. The British leader did not bother to reply. But after the palace coup of August 27, 1985, she became the first world leader to congratulate IBB for overthrowing Buhari.

Why was a “corrective” regime removed from office by the same actors that brought it into being in the first place? Nowa Omoigui opines in Part 1 of his must-read Palace Coup of August 27, 1985; “a profound personality clash and divergence of expectations and priorities among the officers (and civilians) who originally conspired to effect (or benefit from) the removal of President Shagari in 1983.”

Brigadier Ibrahim Bako whose father was a personal friend to Shagari was detailed to arrest and detain Mr. President at Abuja. Unfortunately, Bako was felled by “friendly fire” under circumstances still characterized by “an almost Mafia-like code of silence”

Col. Bello Kaliel, Shagari’s Guards commander remained loyal to his boss to the end but not the Brigade Major, Mike Iyorshe who as a Lt-Col. was implicated in the December, 1985 plot against IBB. Iyorshe was accused of collecting N3000 from Major General Mamman Jiya Vatsa for coup travel expenses. Both among others were executed by firing squad by IBB. Vatsa was also a beneficiary of Shagari’s ouster as FCT minister.

After the overthrow of his nephew. Malam Mamman Daura would be appointed by IBB as chairman, NTA board and member of the panel that reviewed the 1979 constitution that culminated in the cancelled June 12 election.

When President Shagari came into office in 1979, he upgraded Alhaji Umaru Maikaura Ali Shinkafi from Police commissioner of the former Oyo state to Director-General of NSO. Earlier in life Shagari had taught Shinkafi in primary school;

“A few weeks to the execution of the coup which brought Muhammadu Buhari, a major-general, to power, Shinkafi resigned as head of the National Security Organisation (NSO) to attend to his “health”. The rumour was that he was frustrated by the inaction of the Shagari government over the intelligence he provided.

Alhaji Umaru Abdulrahman Dikko however, insisted Shinkafi was part and parcel of the plot against Shagari. Meanwhile, Rafindadi who was supposed to nip the coup in the bud continued in office while his former boss was clamped into detention. The link between Daura and Rafindadi is the now rested Bank of Credit and Commerce International (BCCI) where they were directors under the chairmanship of the future Sultan of Sokoto, Alhaji Ibrahim Dasuki – acclaimed to be a lifelong mentor of IBB.

The December 31, 1983 coup was not nationalistic. Rather it was an opportunistic truncation of our democratic development by a recurrent group of highly ambitious serving and retired military officers with their civilian collaborators. They have effectively dominated the Nigerian political space now for decades. Unfortunately, the nation has always fallen into the traps set up by these well practiced conspirators who mastered how to intermittently; “appeal to the emotions and patriotism of the uninformed public.”

According to the historian Max Siollun;

“The same people have controlled Nigerian political and military life since 1966. The group of officers that brought Gowon to power in August 1966 formed the foundation of all succeeding military regimes until 1998.

Although leadership of the regimes changed, the personalities behind the coups and regimes did not. The young non-commissioned officers and lieutenants that blasted Ironsi from power in 1966 became the colonels who ousted Gowon in 1975, and they became the brigadiers and major generals who overthrew Shagari in 1983.”