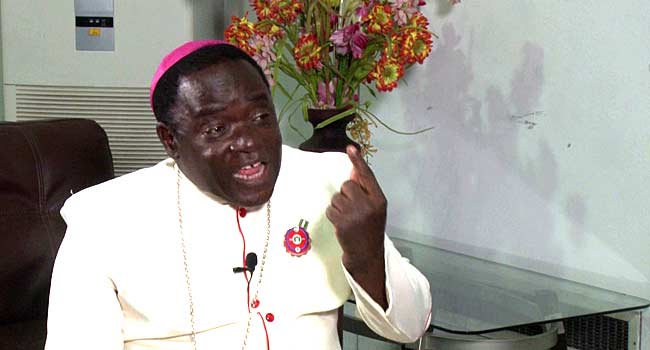 The Catholic Bishop of Sokoto Diocese, Matthew Hassan Kukah has reacted to viral comments attributed to him in prints and the social media.

The Bishop while briefing the media, Tuesday, at the Catholic Secretariat in Sokoto said he is neither anti Muslim no anti Christianity, he said the comments he made about how the country is administered by President Buhari was personal.

It could be recalled that the Bishop of Sokoto Diocese, Rev. Fr. Matthew Hasan Kukah, was alleged to have recently said that, there would have been a coup had it been it was a Southerner occupying the current Nigerian seat of power.

The Bishop was also alleged to have referred to Islam as a religion violence.

What I am trying to say is that, I am a Northerner, born and brought up in Barnawa village a suburb of Kaduna, and I hold no grudges against any northerner be it Muslim or Christian.

“I am so sad with the way innocent souls are being killed on daily bases in the last ten years without justification ” Kukah stated.

“I don’t have problem with president Buhari, but I am not satisfied with his style of leadership,” the Bishop said.

According to Kukah, Nigerians should join hands together to put the country on the right path where every patriotic citizen would contribute to its survival.

The Bishop further stated that no Nigerian is willing to die unnecessarily without a course.

“What I want to see in this country is the prevalence of Justice, peace, fairness and courage amongst citizens, said the Bishop.

“What I categorically said is that, using religion as tool of playing politics is unacceptable and would not be accepted ” Kukah warned.

He said with out a better Nigeria, there could be no good Christian or good Muslim, as such we should work hard to make the country better.

Reacting to calls by some northern groups for the priest to drop the status and joined party politics, Kukah said there is no Catholic priest available for party politics in the country.