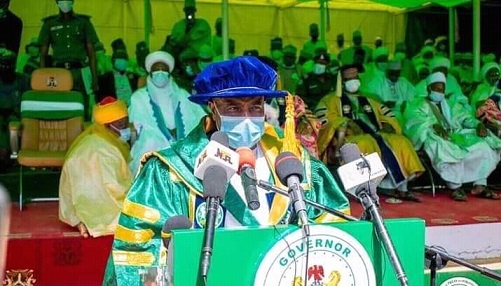 As the Institution marks it’s 50 years of existence today, Monday, the Shehu Shagari College of Education (COE), Sokoto will soon become a University of Education that will retain the name of the former President Shehu Usman Aliyu Shagari after whom it was named.

The college has been so named even before the death, two years ago, of President Shehu Usman Aliyu Shagari.

In a statement made available to journalists in Sokoto by the special adviser to the Governor on Media Muhammad Bello, the College will be the first of its kind to be raised to the level of a university in Northern Nigeria.

Gov. Aminu Waziri Tambuwal disclosed this on the occasion of the Golden Jubilee celebration and 22nd convocation of the College of Education (COE).

According to Governor Tambuwal, the decision to upgrade the institution is premised on the enviable track record it has established in the past half a century, its “uncommon and trademark foresight, vision, creativity and leadership acumen historically associated with our forefathers for over two centuries.”

In addition, the College, the Governor notes “is one of the high-ranking teacher training institutions and among the largest producers of teachers in Nigeria.”

Applauding the past and present leaders of the College for raising the institution “to this enviable level,” Gov. Tambuwal said in furtherance of its upgrading, “approval has been given for the construction of two-storey students’ hostels, capable of accommodating over 400 students… in order to address the challenges of students accommodation.”

He appreciated “the combined efforts of the College Council, Management, staff and students for maintaining relative peace and a conducive environment for academic activities on the College campus,” while urging them “to work harder to improve the quality of teachers produced in the institution. This has become imperative for us to achieve our ambition for higher standard in Basic and Secondary Education.”

He added that: “while I am happy for the progress recorded by the College over the past 50 years, I urge the leadership of this glorious institution at all levels to be more prepared to position the College for greater achievements in the 50 years ahead. This calls for renewed vigour, creativity, innovative ideas, quality control, cooperation and collaboration to the College to attain its vision of impacting knowledge and skills suited for practice in the 21st Century.”

Gov. Tambuwal said his administration has been embarking on extensive rehabilitation, reconstruction and building of hundreds of primary and secondary schools in the State, just as it will give more premium “to the needs of its tertiary education sector.”

In his address, the Commissioner for Higher Education, Prof Bashir Garba said through the support of the state government, the college has recorded several milestones over the past 50 years of its services to humanity.

Prof. Garba also added that with the encouragement of government, the college, in a multiple affiliation with the Usman Danfodio University, Sokoto and Ahmadu Bello University, Zaria, has also been running undergraduate programs in education for over 20 years.

In his address, the Provost of the College, Dr Wadata Hakimi said the college from its inception to date has recorded a total of 48,936 holders of the National Certificate of Education (NCE).

He added that the college affiliated undergraduate programmes have equally produced over 12,500 holders of degree in education.

At the ceremony, six personalities where presented with the award of fellowship which include former Executive Governor of Niger state, Alhaji Babangida Aliyu, former Chairman of the college’s governing board, Ambassador Shehu Malami and the Executive Secretary of the National Commission for Colleges of Education (NCCE), Prof Bappa Aliyu Muhammad.

Highlight of the ceremony was the unveiling of the college’s Golden Jubilee monument by Gov Tambuwal with the assistance of the Sultan of Sokoto, Alhaji Muhammad Sa’ad Abubakar