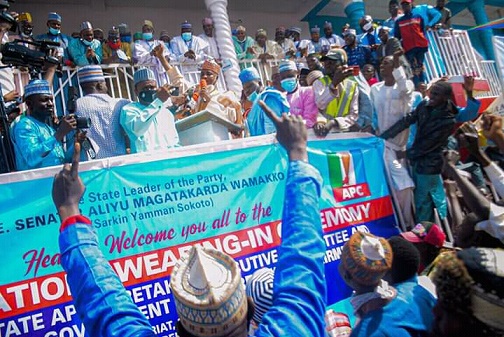 The All-Progressives Congress (APC), Sokoto State Chapter, on Sunday, inaugurated the State Caretaker Executive Committee and the Caretaker Chairmen for the 23 Local Governments.

Speaking at the historic event, the Leader of the Party in the state, Senator Aliyu Magatakarda Wamakko, felicitated with the new caretaker leaders.

Wamakko, who represents Sokoto North Senatorial District, also said that, their reappointment on caretaker basis was sequel to their track records of unblemished leadership.

He said that, Nigerians were aware that, the people of the state have remained supportive to the APC.

Wamakko also assured of sustained efforts towards ensuring that the party grows from strength to strength, at all levels.

He again appreciated the continuous support of the cross section of the people of the state to APC,saying, “I am once again thanking clerics, traders , traditional rulers , women and youths groups, in this direction.”

Also speaking, the Minister of Police Affairs, Alhaji Muhammadu Maigari Dingyadi, lauded the leadership of the party in the state, for providing efficient and credible leadership.

Dingyadi also commended Wamakko for his commitment and selfless service to the people of the state and the APC.

He said “without him, without his support and encouragement, we would not have recorded the tremendous achievements we have made.

“We will remain resolute and firm, and will never despair, in Sha Allahu, APC will clinch the Governorship position in 2023.”

The Minister also maintained that, APC remains the party to beat in the country, just as it is the greatest party.

Also speaking, the Executive Secretary, Police Trust Fund and APC Gubernatorial Candidate in the 2019 General Elections, Alhaji Ahmed Aliyu Sokoto, said that, there was no any party in the state, but, the APC.

Aliyu further stated that, the members of rhe party in the state have remained comfortable and there was no despoilment in the party.

The Chairman of the party in the state, Alhaji Isa Sadiq Achida said that, it has remained united and intact.

He explained that, the party in the state had passed a vote of confidence in the administration of President Muhammadu Buhari, for his dogged and sustained efforts, to better the lives of Nigerians.

The event was attended by the members of the National and State Assemblies elected under the platform of the party.

Others were Ambassadors Abubakar Shehu Wurno and Sahabi Isa Gada, as well as a chieftain of the party, Alhaji Musa Bashar Rahamaniya, among several other top dignitaries.