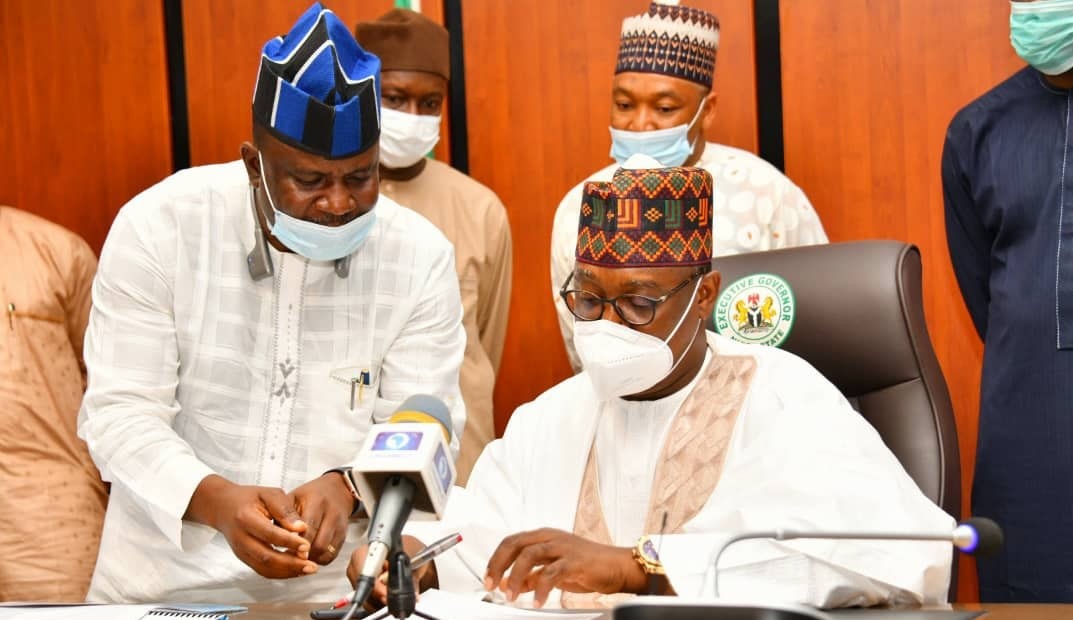 Governor Abubakar Sani Bello has assented into law, the Niger State 2021 appropriation bill as passed by the State House of Assembly.

The budget which was signed, Saturday at the Government House, Minna, was presented by the Speaker of the House, RT. Hon Abdullahi Bawa Wuse, who was represented by the Deputy Speaker, Hon Jibrin Ndagi Baba, member representing Lavun Constituency along with other members.

The Chief Press Secretary to the Governor, Mary Noel-Berje in a signed statement said: “The Governor while signing the budget, said that the 2021 budget is a moderate one as the Covid-19 Pandemic made the government scale down the size of the budget due to the downturn of the economy.”

He added that with resources reduced due to the Pandemic, the government will not fold its arm as it would use available legal means to increase internally generated revenue.

According to the statement, the Governor urged the people to be patient and supportive of the government as taxes and levies imposed on them were for their collective good.

The 2021 budget he said, is broad and moderated targeted at completing ongoing projects, as such seek for the understanding of the people.

Governor Sani Bello while commending the legislators for working day and night towards the quick passage of the budget assured that the executive arm will ensure its implementation as passed, the Governor added.

He said that the legislators have made history by passing the bill without crossing to the year of the fiscal budget causing a delay in its implementation.

Meanwhile, the Speaker of the House said that the initial budget of over N151.2bn as presented to them was increased by over N2.1bn.

He promised that the Legislators will strengthen their oversight function and ensure that budget was strictly adhered to as passed and assented to. The Legislative Arm will continue to corporate with the other arms for the delivery of dividends of democracy to the people, the Speaker assured.