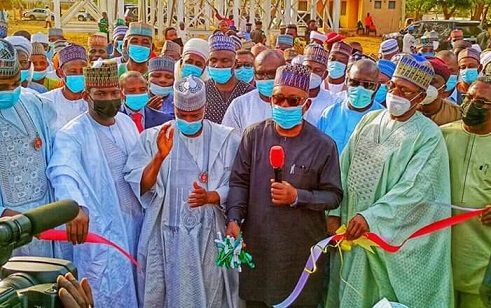 The National Chairman of the People’s Democratic Party (PDP), Prince Uche Secondus and members of the National Working Committee (NWC) of the party has commended the Governor of Sokoto State for executing viable projects that have direct bearing on the lives of the citizenry.

The PDP Chairman alongside members of the NWC were in Sokoto for one day working visit.

The National leader of the PDP while Inspecting a number of projects in the state described Governor Aminu Waziri Tambuwal as a visionary leader, who impacted positively on the lives of the less privilege.

In a press statement made available to newsmen by the Special Adviser to the Governor on Media and Publicity, Muhammad Bello said the PDP Chairman with members of the party’s National Working Committee (NWC) inspected, Sokoto State University Teaching Hospital (SOSUTH) at Kasarawa a suburb of the state capital.

“The University teaching Hospital when completed, will not only serve the people of Sokoto State but the entire North-West geo-political zone, the nation and some neighbouring countries,” the statement said.

The NWC also inspected the ongoing construction of Government Girls Science Academy also in Kasarawa , the completed Advanced Diagnosis Center and  the ongoing 500 Housing Estate at Gidan Salanke outskirt of the state metropolis.

Other projects inspected by the PDP bigwigs are General Hospital Wamakko, the dualization of intra city Maituta and Waziri Abbas roads all in the state metropolis.

Commenting on the Advanced Diagnosis Centre, the PDP National secretary, Senator Umar Tsauri commended the Tambuwal for his giants stride and urged other PDP Governors to emulate.

At Government Girls Science Academy under construction, the PDP National Women Leader, Hajiya Mariya Waziri Gwandu, thanked the Governor for improving Girl-child education, just as she commended him for allowing the participation of women in the activities of the state.