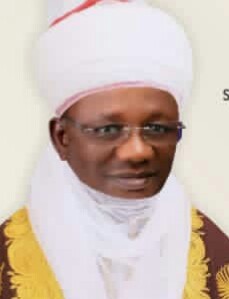 The turbaning came as a result of the death of his late father Alhaji Yusuf Yari who served the District in that capacity for many years.

Speaking during the occasion at his palace in Goronyo, the District head Alhaji Muhammad Sambo said the turbaning of Alhaji Shuaibu Yusuf Yari is based on his outstanding qualities, his track records of service and an heir apparent to the thrown.

He said the New Yarin Goronyo has contributed immensely to the development of the District as a civil servant. As Yarin  Goronyo Alhaji Shuaibu would served as traditional Chief Security of the District and is expected to advise the district council on how best to keep the area safe.

The District head further called on the people of the area to support and cooperate with the new Yari on matters that relates to the development of the District.

He congratulated the new Yari for succeeding the thrown of his forefathers that served the area meritoriously.

The new Yarin Goronyo Alhaji Shuaibu Yusuf is the current President of the Nigerian Union of Local Government Employees (NULGE) Sokoto state Council, and a Director of Finance at Rabah Local Government.

In his remarks shortly after the turbaning, Alhaji Shuaibu, the new Yarin Goronyo thanked the District head, the Sultanate Council and people of the area for given him the opportunity to serve in that capacity.

He said he would continue to give useful advises and suggestions to the District head on matters that would make the area great.

Yari Shuaibu however called on the people of the area not to relent in giving vital information to security agencies in the area on the movement and activities of suspected persons in their midst especially now that cases of banditry and kidnapping are becoming the order of the day.

He however expressed appreciation to all those who contributed to the success of the turbaning ceremony.

The turbaning ceremony was attended by friends and well wishers from within and outside the state.

Emir of Bichi Urges FG to Make Security a Priority