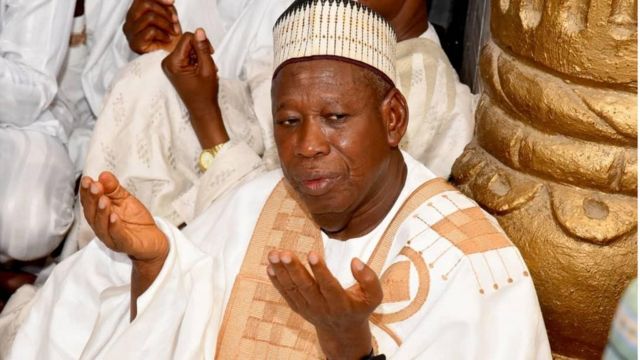 Kano state governor, Dr. Abdullahi Umar Ganduje said he received with deep feeling of great loss, news of the passing away of Makaman Karaye and District Head of Madobi, Alhaji Musa Saleh Kwankwaso, who died Friday morning at the age of 93.

In a statement signed on Friday 25 December, 2020 by the Commissioner for Information, Malam Muhammad Garba, the governor, who left for Dubai on a private visit on Thursday, stated that Alhaji Musa Saleh, recently elevated to the position of Kingmaker, would always be remembered and honoured by the people for his immense wisdom and competence as a traditional ruler, as well as for his perseverance and foresight.

“On behalf of myself, family, the government and the people of Kano state, I commiserate with Senator Rabi’u Musa Kwankwaso, Karaye Emirate Council and all the people of his domain which the departed kingmaker presided illustriously as traditional ruler in the District of Madobi for more than two decades.

The late Makama, who personified dignity and finesses, is a devout Muslim. He left us great lessons as a very strong symbol of godliness, tolerance, justice, honesty and service to our dear state. Indeed, we are particularly pained that he left us at a time like this when his wealth of experience, valuable fatherly advice and guidance are needed the most,” the statement added.

He however said that it was gratifying that he has left behind towering legacies for posterity which should serve as comforting to us all.

Governor Ganduje said Alhaji Musa Saleh Kwankwaso was not only loyal to his people in his immediate domain, but to Kano, Nigeria and humanity at large.

He prayed that the Almighty Allah would receive the late Makama’s great soul and grant him Aljannah Firdausi and his family, Karaye Emirate and the people of his domain the fortitude to bear the irreparable loss.