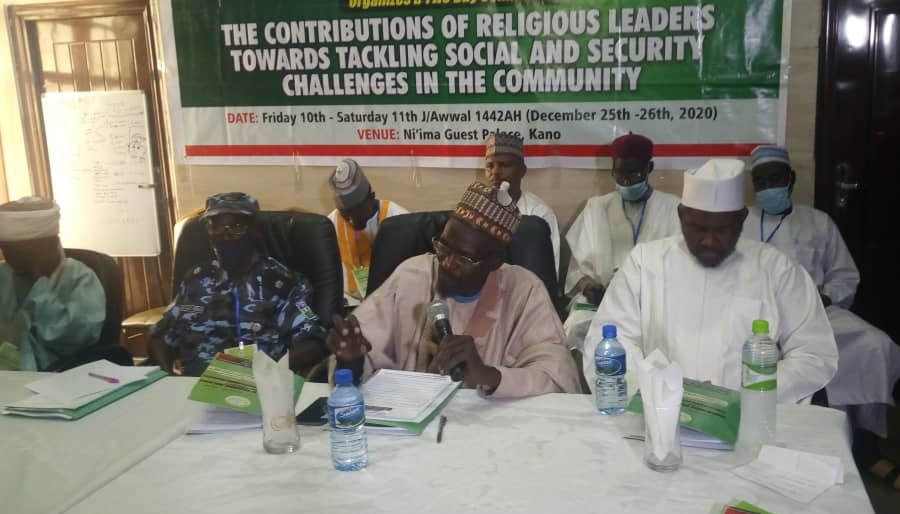 Religious Leaders have been urged to support and promote community policing in tackling social and security challenges militating the country.

The National President of Jamatul Tajdidul Islam, Engr Malam Abubakar Mujahid made the call while speaking at the opening sessions of a two-day workshop organized for religious leaders from 19 northern state of the federation in Jigawa, Friday, with theme “The Role of Religious leaders in tackling Social and Security Crisis in Nigeria.”

Engr Mujahid said, if community embrace security as everyone’s responsibility, it would leave in peace by resolving any disagreements between two worrying parties or any action that is tantamount to create discomfort and disturbance before going out of hand.

“Even though provision of security in its full concept is one of the primary responsibilities of government but the community also have a role to play in achieving the desired goal.”

He cited example that, the failure of community and leadership to find a lasting solution to pastoralists and farmers clash over the decades as one of the main causes of security challenge in the country.

The cleric also called on government and other education stakeholders to came up with effective policy that would encourage entrepreneur training and industrial developments to address the high rate of unemployment among our teeming youth that makes our security very fragile.

He also called on the participant to cascades the training and also implement the idea in their various community in complementing government and Security agencies effort in promoting peace and security in Nigeria.

In his presentation at the occasion, The Commissioner of Police, Kano state, CP Habu Ahmad Sani said being that religious leaders have confidence and trust of the people, it made them to have a major role to play in tackling any challenge in the society including security and social crisis.

He said, Islam and any other religion are preaching tolerance, peace, love and compassion, therefore, clerics should be an exemplary model in abiding by such tenants.

CP Sani who was represented by the Chief Imam of the State Police Command, SP Haruna Abdulkadir also called on religious group and religious leaders to fight bigotry, extremism and any other ideology that preach for violence.

The CP then thanked Jamatul Tajdidul Islam and Students Scholarship Foundation who jointly organized the seminar, urging other religious group to emulate the idea.