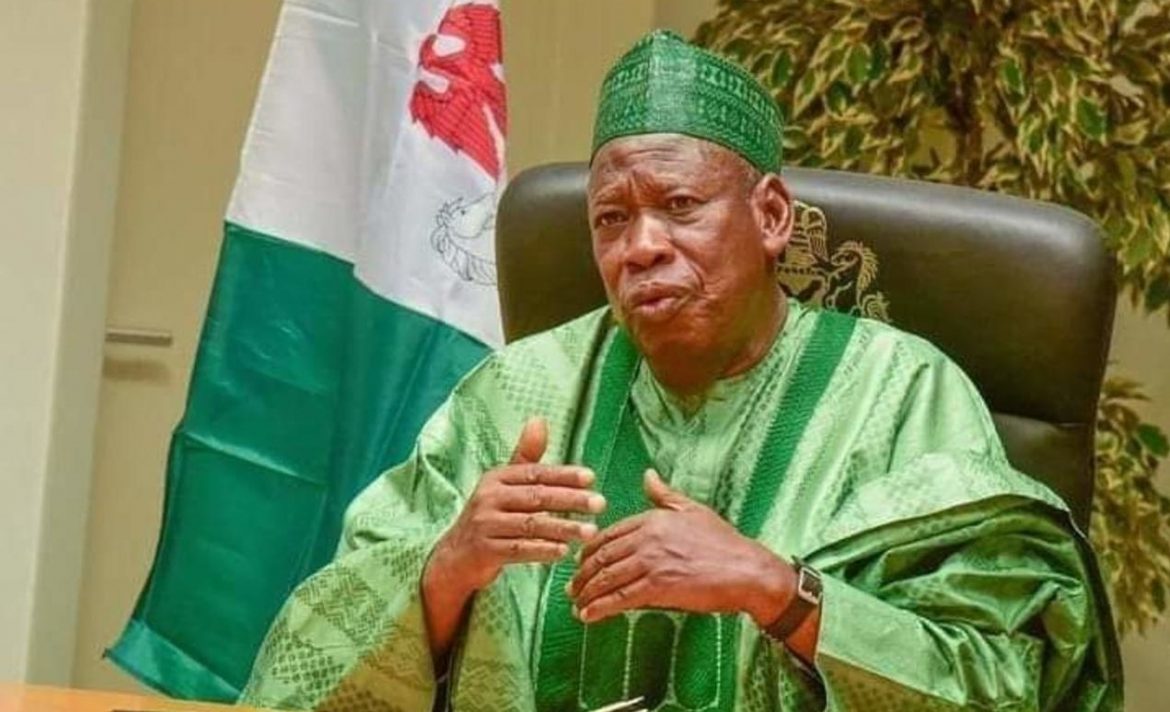 While trying to clarify the public-oriented intent of Kano state government’s handling of some public properties in the state, for the overall development of the state, Governor Abdullahi Umar Ganduje of Kano state describes those politicising the efforts as primitive “… who can’t see beyond their nose.”

Chief Press Secretary to the Governor, Abba Anwar said the Governor dropped the hint during an inspection tour to the Multi Billion Naira Kano Economic City, sited at Dangwauro area on Zaria road, a few kilometres away from the metropolitan city, Tuesday.

On the Triumph Newspapers building, popularly known as Gidan Sa’adu Zungur, he challenged that, “For those critics who dont even understand the practice of modern journalism, that does not require such a big building for the production of newspapers, we are turning the building into modern Foreign Exchange market.”

Adding that, those marketers of Waper Bureau-De-Change market, would be relocated to the building, “…of which hundreds of our marketers will benefit immensely from this development.”

While challenging critics about their “…sheer inability to understand modern day newspaper ownership, control, management, production and marketing,” he urged them to always understand an issue before delving into it.

This, to him, “…is a sheer ignorance of modern technology in media practice. People should be reminded that, Triumph newspaper company was forced to stop any production by the past administration. And the company was closed for many years before we came to power.”

According to the statement, “Daula hotel has become obsolete, if I can use that concept, and does not in any way depict modern day hotel business. What we are doing now, is to modernise the place and put it to good use. That is why we wonder when these people say such properties are being taken away from public to personal use,” he challenged.

On the popular Shahuci motor park site, Ganduje challenged further that, the building started by the past administration, that was abandoned, became criminals hideout. Which therefore necessitated for making the place to become occupied and lively.

That was what informed the timely intervention of his administration, in order to create an atmosphere that could provide more jobs and businesses for the public. Stressing that, “That is an open endeavor and effort for all to visit and see for themselves.”

“But those who don’t seem to get the clear purpose, which is people-driven, of turning such edifices to modern places, have shallow level of understanding and cannot see beyond their nose. So embarrassing and increasingly ill-conceived,” governor lamented.

He further reminded that, when his administration promised to give employment opportunities to large concentration of Kano citizens, particularly youth and women, part of the driving force towards achieving that, “…is how we are creating all these opportunities through modernizing our old-fashioned ways of doing things.”

As he clearly points out before the public that, “This project of Kano Economic City, was conceived for over 20 years before now, and abandoned by previous administrations, due to lack of political will. So, the project didn’t see the light of the day. But when we came in with the political will, look at the level of work done.”

During the inspection tour, he was impressed with the level of progress at the market site, Dangwauro area, particularly the section designed to house drug marketers, who would be relocated from all markets to the new Economic City modern market.

“With this modern drug marketing, we are so sure of further doing away with peddling of fake and counterfeit drugs, drug abuse and drug mismanagement. We are going to have security agencies attached to the market, for instance, officials of the National Drugs Law Enforcement Agency (NDLEA) will be there,

Pharmaceutical Council of Nigeria (PCN) will be there and all other related stakeholders, will all be there. So, can’t you see how we are putting more eyes on drug production, management and control? But those who don’t have the capacity to grasp this reality clearly, have started peddling all sorts of unguided statements,” he argued.

As the Project Engineer of the market Eng. A.S. Yunusa assured the governor that, the drug marketers’ section of the market would be completed and commissioned by the end of January, next year, governor Ganduje appealed to Kano citizens to rush and own shops there. Being that the edifice is on Public Private Partnership (PPP) arrangement.

“We use public private partnership to boost our economy. This Economic City has over 10,000 shops, there are Banks, Hotels, Restaurants, Police stations, among many other facilities. All in an effort to make our economy compete favourably,” he said.

Governor Ganduje hinted that, “All our projects will, In Sha Allah, be completed during our tenure.”