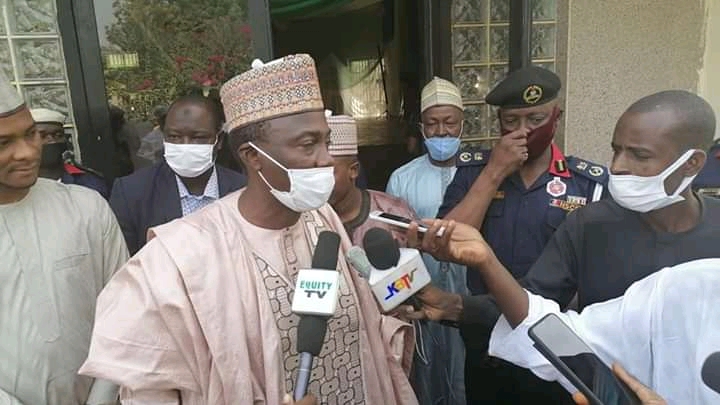 The concept and implementation of community policing, especially with the active involvement of the communities according to him remains the best and effective way to ensure security in communities.

The Governor stated this at the sensitization and awareness campaign program organized by the State Command of the Nigeria Police Force on Monday at the Presidential Banquet Hall in Birnin Kebbi.

The governor who was represented by Secretary to the State Government (SSG), Babale Umar Yauri enumerated some of the measures and strategies already in place by his administration to ensure success of community policing.

These include sponsoring of 336 Kebbi citizens for training on community policing at the Police College while another set of 450 will soon undergo same training.

He also disclosed that Committees on Community Policing have been inaugurated in the state by the government while sensitization exercise from district to ward levels involving community leaders is in the pipeline.

The governor therefore commended the Inspector General of Police (IGP) Muhammad Adamu and security agencies for coming up with Community Policing Initiative.

Speaking Earlier, the Kebbi State Commissioner of Police (CP) Agunbiade Oluyemi Lasore, who has just been promoted to the rank of Assistant Inspector General (AIG), in his welcome address, commended state Governor for his unwavering support to the police and other security agencies which he said has made the state enjoy the status of the most peaceful state in the country and one with the lowest crime rate.

Adding that the peace enjoyed in Kebbi is due to the purposeful leadership of Governor Bagudu.

He however said the implementation of community policing by IGP marked the beginning of Community Policing with stakeholders.

The CP expressed hope that all the relevant stakeholders would play vital role in the implementation of community policing in the state.

In his presentation at the occasion, Retired Deputy Inspector General of Police (DIG Rtd) Hashim Salihu Argungu said the security dialogue was apt and timely.

Security according to him serves as the foundation of all human activities and development.

He also said security is not only fundamental to the sustenance of lives and property, but also the bedrock of all human development’”

In his remarks, the Special Adviser on Security to the governor, retired Major Garba Rabiu Kamba said the state government has done so much to support both security organizations and vigilante groups to strengthen the fight against crime and criminality in the state.

He added that the state government would streamline the activities of vigilante groups to ensure a single command structure and ensure law and order.

He expressed hope that the sensitization will provide working strategy to address the rising phenomenon of insecurity in Kebbi state and Nigeria as a whole.

Stakeholders who delivered goodwill messages at the event include the Deputy Speaker, Kebbi State House of Assembly, Muhammad Buhari Aliero, representative of the Emir of Gwandu, who spoke on behalf of the four emirates.