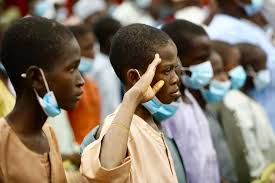 The image of one of the rescued Kankara boys saluting as they were lined up at Government House, Katsina is monumental. Truly inspiration, for me it is a throwback reminder of the then 14-year-old, Chia Diko Detembir who back on September 17, 2006 was working on a farm couple of kilometers from his village located at the Ngokugh Hills, at Kwande LG of Benue when a NAF 228 crashed with 18 on board en route to Obudu.

Chia rushed to the crash site and used one of the phones in the debris to call his father’s line (the only one in the village) who in turn alerted the authorities. The boy’s prompt action saved 5 lives. 8 major generals and 2 brigadier generals perished.

Then Chief of Defense Staff (CDS), General Patrick Owoye Azazi who was supposed to have been on that same flight from Abuja was so overwhelmed when he eventually visited the crash site on the hills and asked Chia what he wanted to be in the future. The answer was “A soldier” Azazi then promised he would ensure so.

Though the 4-star general would perish in another air mishap on December 15, 2012, Chia passed through NDA graduating in Economics. He was commissioned as a Second Lieutenant in 2018.

The young Kankara boy must have saluted by reflex despite the trauma of abduction. It was an instinctive action historically caught on camera. A poignant sense of inherent duty. Indeed, leaders are born.

The Katsina boy and Chia are young Nigerians with so much to give our nation. They are untainted by ethnicity and religion. Only a sense of national purpose can reinvent Nigeria!

I hope somebody would follow up on this young Kankara boy. He might also want to serve the nation as a soldier. If not his sense of patriotism is still not in doubt.

The moral here is that everybody needs a point of contact. That of Chia was Azazi. Our Kankara son also needs his. He is no doubt a future leader in whatever vocation.