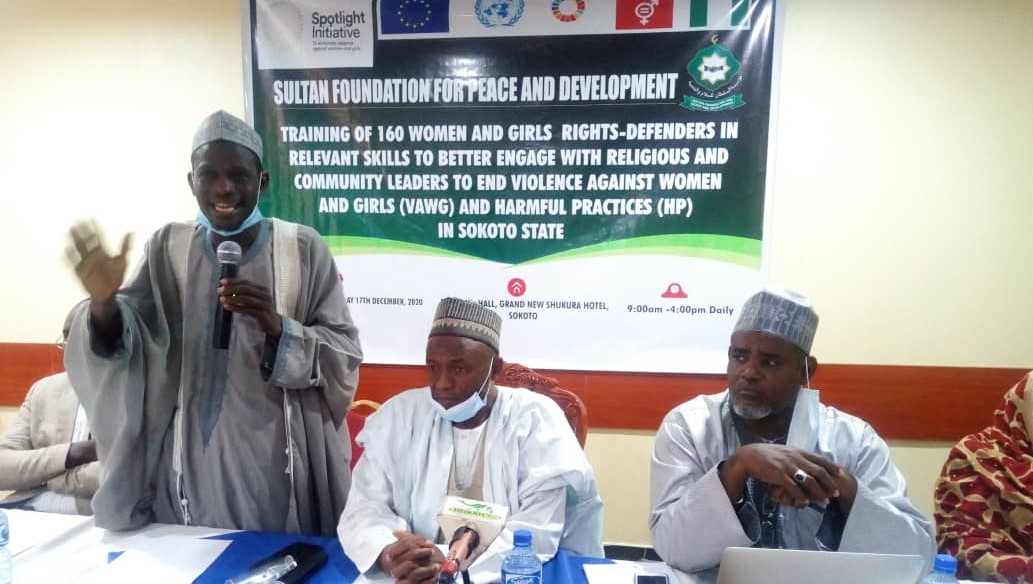 As part of effort to end Violence against Women and Girls (VAWG) and Harmful practices (HP) the Sultan of Sokoto Alhaji Dr Muhammad Saad Abubakar III Foundation has trained 160 Women and Girls Rights Defenders at a One-day training program held at Grand Shukura Hotel on 17, December, 2020 in Sokoto.

The objectives of the one day training are to identify and discuss the higher prevalence of violence against Women and Girls and strategies to promote gender equitable norms, prevention and response to EVAWG/SGBV/SRHR/HP in the society.

Participants at the workshop will also share experiences of handling, supporting and advocacies for victims of SGBV/HP.

The trained Women and Girls right defenders are expected to better engage community and religious leaders towards ending VAWG and HP at the community level.

Speaking during the event, the Chairman of the occasion Professor Isah Muhammad Maishanu highlighted the importance of defending the Rights of Women and Girls in the society.

He said there is need for people with relevant skills, religious and community leaders to engage one another in the crusade to end violence and other harmful practice against women and Girls in Sokoto state.

In his presentation at the workshop, Dr Ibrahim Muhammad Liman Sifawa recommended for the provision of concrete legislation, increased availability and utilization of data, child birth spacing and improved utilization of quality essential services as measures to end GBV.

The paper refers to violence as any act that is perpetrated against a person based on his gender affiliation which inflicts harm on women, girls, men and boys, and is the most severe violation of several human rights.

Dr Salisu Ismail in his paper presentation duel on medical and psychosocial effects of GBV and other harmful practices, he mentioned early marriage as a serious factor depriving young girls access to education.

He also spoke on the dangers of female genital mutilation which he said usually leads to obstruction in labour and visico viginlal fistula.

Also, in her paper presentation, Barrister Safiya Muhammad of Usnan Danfodiyo University Faculty of law blamed access to justice by victims of GBV/SGBV/HP as contributing factor to the scourge which is becoming pandemic.

She said victims of GBV/SGBV at the rural areas might not have justice as courts are mainly centralized in the urban canters, saying that times transport fare becomes a problem to the parents and victims alike.

A guidance and counselling Doctor with Usmanu Danfodiyo University Teaching Hospital, Dr Halimatu Sadiyya Abubskar blamed parents for not enlightening their wards on the dangers rape and sexual vices.

She said parents need to inform their children on having sex before marriage as well as coming in closed contact with men at early age.