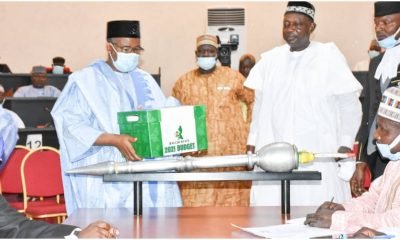 The Governor signed the budget in a ceremony held at Dutse government house attended by members of the state executive councils, members state assembly, APC leaders and other stakeholders.

The signing of the budget came barely one week after the state house of assembly passed it.

Speaking shortly after signing the budget, the Governor commended the members of the house for the speedy passage of the budget.

He said the speedy passage of the budget by state assembly has give an opportunity to the executive to review and reorganized the state budget calendar.

“Our budget calendar would start from January to December, as we will commence implementation of 2021 budget by January.”

Governor Badaru then promised to collaborate with legislative, civil servants and all other stakeholders to ensure maximum, effective and transparent implementation of the signed budget.

According to him, the budget was designed to consolidate the previous achievement of his government to take Jigawa state to the next level.