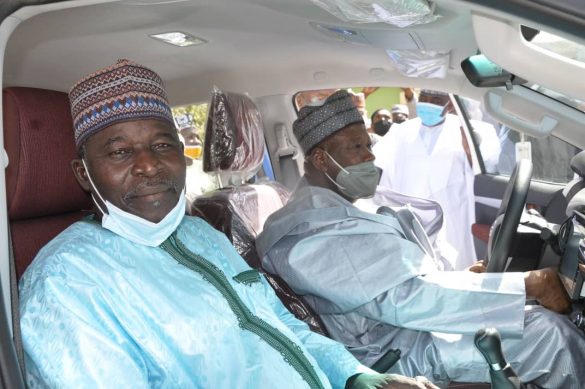 The Project Communication Specialist, Ameen K. Yassar in a signed statement, Monday, said three vehicles and 110 motorcycles were procured by SASAKAWA while one pick-up van and 100 motorcycles are for KNARDA, to be used for service delivery by their respective agricultural extension workers across the state.

It could be recalled that in August and December this year, the two agricultural organizations signed separate multi million dollars Memoranda of Understanding, MOUs, with the Kano Agro-Pastoral Development Project, for interventions in crops and legumes value chains respectively, covering a period of five years.

According to the statement, the interventions, will impact on nothing less than 550, 000 farmers, entail skills development for farmers and extension workers, provision of Seeds, Fertilizers, pesticides, post-harvest handling, value addition and agri-business services among other things.

Speaking during the inauguration ceremony held at KNARDA headquarters in Kano city, Gov. Abdullahi Umar Ganduje said “the move is the light of government’s desire to boost food security and economic progress”.

“We have enlisted the support of the Islamic Development Bank so that we can develop our agro-pastoral systems and mitigate conflict. We, therefore, want to thank SASAKAWA for joining hands with us to achieve these goals.”

He expressed optimism that the vehicles would be judiciously utilized to ensure value for money.

In his speech, the Managing Director of KNARDA, Alh. Ibrahim Sulaiman Dan’Isle described the technical cooperation with Kano Agro-Pastoral Development Project as a step in the right direction, as the state moves to rejuvenate its economy.

Kano State Agro-Pastoral Development Project, an Islamic Development Bank funded project, with the support of the Life and Livelihoods Fund, was conceived to contribute to poverty reduction and to strengthen food and nutrition security of vulnerable population in Kano.