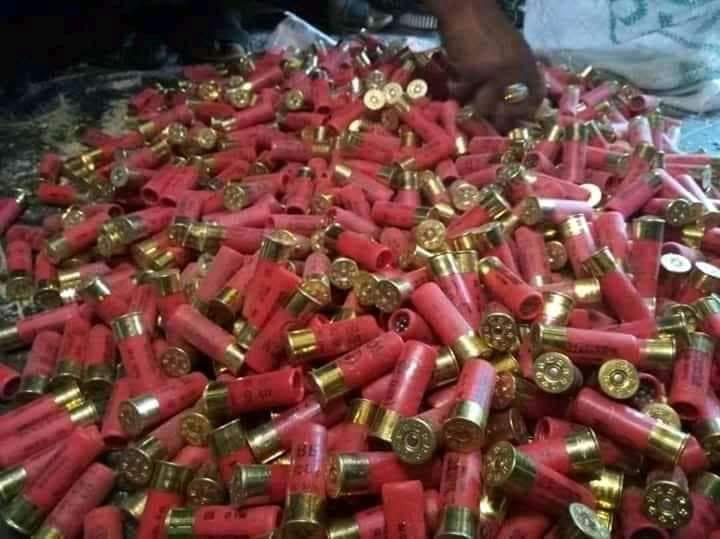 The Kebbi State Commandant of Vigilante Group of Nigeria (VGN), Alhaji Sanusi Ibrahim Gazah has disclosed that his men attached to Zamare water side area, Yauri Local government has arrested two suspects for allegedly smuggled 73 locally guns and 450 weapons into the state.

Gazah, who confirmed this to newsmen in an interview in Birnin Kebbi on Monday, confirmed that the VGN were the ones who handed over the suspects and weapons to the Nigeria Customs Service.

He explained that the seized weapons were conceived inside bags of paddy rice stressing that his officers suspected and subjected the vehicle to thorough inspection.

According to him, “they intercepted one Canter loaded with bags of paddy rice. So, the weapons were conceived inside the loads in their vehicles. When they arrested the two suspects and impounded the Canter truck. They invited the Customs officers and police that were around. The took the seized vehicle to Customs office where they discovered 73 guns inside those bags of rice. And 450 weapons (cartridges) were found.

Earlier, Commander of VGN at Zamare water side, Alhaji Zakari Zamare told newsmen in Yauri  that the group intercepted the vehicle after it was transported by ferry boat from the River Niger in Zamare to upland in the area.

“As we were on our routine duty, we had seen a vehicle laden with bags of locally produced rice and we suspected the content in them which resulted in vigorous investigation of the bags” he said.

“We used our local equipment, to penetrates the bags deep down and we discovered a suspected iron, and that was what led to using knife in tear the bags, he added.

“In the first bag, we discovered 14 local guns, on seeing the discovery, people in the area trooped in and we did not want a situation where the locals will take law into their hands, hence we took the suspected driver and his assistant to the nearest Police station for onward transferring them to Customs office for necessary investigation.”

He added that the suspects were together with the owners of the rice, saying that they disappeared in the crowd as soon as they had observed the interception of the vehicle.

“All alone, they were tailing at their back as soon as they observed the vehicle got clearance from one blockage to another; they tailed a bit but when we caught the suspects, they just disappeared,” Zamare explained.

The commander revealed that the bags contained 73 local riffles and spare, 443 ammunitions, explaining that all the riffles were loaded with ammunitions.

Recall that Stallion Times reports that, Public Relation Officer of Nigeria Custom Service (NCS), DC Joseph Attah in a statement he issued in Abuja had confirmed the incident stressing that they intercepted a truck loaded with locally produced rice with some sacks concealed under the rice.

“Upon careful examining the bags were found to contain 73 locally manufactured guns and 891 cartridges.

Three (3) persons were immediately arrested and are being detained while preliminary investigation is ongoing.”