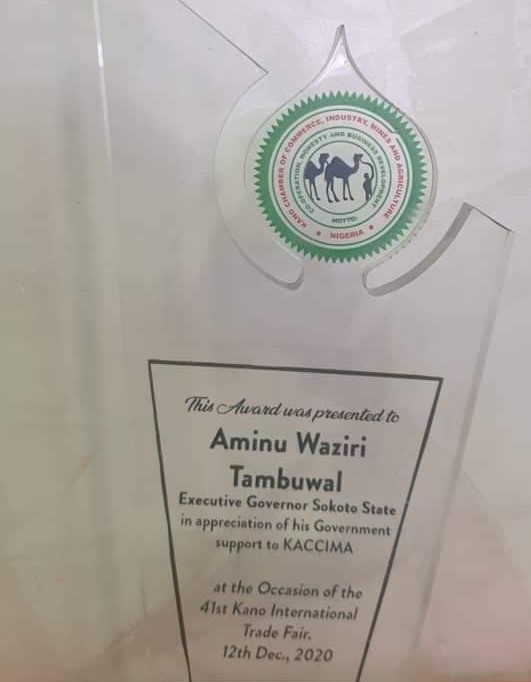 In a press statement made available by the Governor’s Special Adviser on Media Malam Muhammad Bello, the Governor was presented with the honor by KACCIMA, which also expressed its appreciation for his continuous support.

The award was presented to Governor Tambuwal at the 41st Edition of Kano International Trade Fair holding in Kano.

The Governor according to the statement the governor was represented by the Sokoto State Commissioner for Commerce and Industry, Alhaji Bashir Gidado Jegawa.

The statement further stated that Governor Tambuwal re-echoed the long-standing symbiotic trade relationship between Sokoto and Kano people, especially in the areas of commerce, scholarship and interactions between the traditional institutions of the two historical cities.

According to the Governor, his administration has recorded modest achievements in the areas of supporting the establishment and nurturing of MSMEs as well as businesses and industries operating in Sokoto State.

“These include provision of industrial land with infrastructure, disbursement of over N3 Billion interest -free loans to the business community, establishment of a One-Stop Shop for business registration, certification, provision of permits, advisory services and tax collection,” the governor said.

He enumerated the rejuvenation of Sokoto Investment Company, restructuring of the State Board of Internal Revenue, creation of Small and Medium Enterprise Development Agency (SOSMEDA) and the Sokoto Geographic Information Systems (SOGIS).