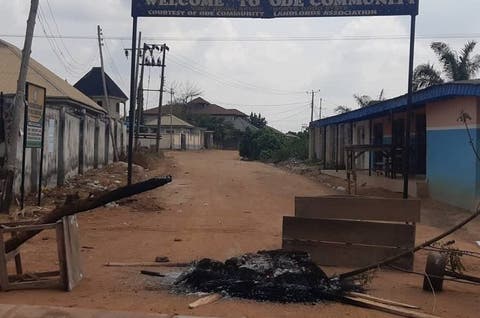 Report says two persons have been killed and number of houses set ablaze at a community called Isinigbo in Akure North Local Government Area of Ondo state over alleged land dispute with a neighbouring town.

The attack was allegedly carried out in the night by faceless groups of gunmen hired by a neighbouring community.

A resident of Isinigbo who witnessed the attack and escaped said the Palace of the Asinigbo and some houses had been burnt down by the hoodlums.

It was also gathered that the government had deployed security agents to the area to maintain peace in the ancient community.

In recent time insecurity has become a major challenge in Ondo state as communities attack each other, increased rate of kidnap, shootings and herdsmen versus farmers crisis.

Stallion Times earlier reported the killing of a traditional ruler in Ondo state which investigation is still on and the kidnap of the wife of the governor’s Chief of Staff which was later released.

Very ugly development. The failure of our institutions has contributed a lot to people taking laws into their hands.