President Buhari Must Take Back Nigeria Himself 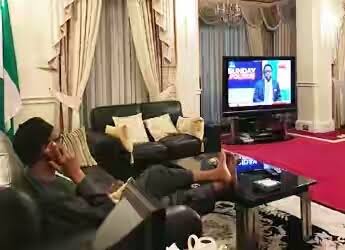 On March 4, 1933, Franklin Delano Roosevelt (FDR) was sworn-in as President of the United States. The American economy was in shambles. Probably, worst than where we today find ourselves in Nigeria. One out of every four of their citizens was unemployed. Americans were hungry and therefore understandably angry. Their nation’s Stock Exchange had fallen by 75% and over 4000 banks had become distressed crashing with the life savings of millions of Americans. Suicide rates had skyrocketed and the entire citizenry despondent.  Simply put the American economy had crashed;

“As depositors panicked and rushed to withdraw their money from the remaining banks, the crisis threatened to bring down the nation’s entire financial system.

Two days later, FDR declared a nationwide “bank holiday,” temporarily shutting down the nation’s entire banking system. Called into a special session, Congress passed the Emergency Banking Act on March 9. The bill gave the federal government the power to investigate each bank’s finances. Those that were judged to be healthy and stable enough would reopen on March 13.”

“But on March 12, 1933, the day before banks were set to reopen, it wasn’t clear that these emergency measures had done enough to calm the public’s fears. That evening, at 10 pm Eastern time, FDR addressed the nation via radio broadcast,”

“My friends, I want to talk for a few minutes with the people of the United States about banking,” he began. For roughly 13 minutes, more than 60 million Americans listened as FDR explained—in straightforward language designed “for the benefit of the average citizen”—what the federal government had done in the past few days to address the banking crisis, why they had done it and what the next steps were going to be.

After explaining how banking worked, Roosevelt laid out what had happened to cause the  crisis. He argued that the government’s emergency measures would enable a survey of the nation’s banks and allow stable ones to reopen.”

“After that, he said, people could feel completely safe returning their money to the banks rather than hoarding it at home out of fear. “I can assure you,” he said, “that it is safer to keep your money in a reopened bank than under the mattress.”

Finally, FDR called on the American people to renew their “confidence and courage,” and to have “faith,” rather than be “stampeded by rumors or guesses.”

“Let us unite in banishing fear,” he concluded. “Together we cannot fail.”

“Using a slow, calm and steady voice that rose and fell naturally, he seemed to be engaging in a conversation with his listeners, but FDR had a way of making them feel informal and fresh.”

How did the frustrated Americans receive FDR’s radio message?

“The effect was powerful: On March 13, when healthy banks reopened, people lined up in droves to return their cash. More than half of the funds Americans had withdrawn during the crisis were back in the bank within two weeks. March 15, the first day stocks were traded after the banking holiday, saw the market’s largest ever one-day percentage price increase, reflecting a new surge of confidence among American investors.”

What FDR pulled off was not rocket science. He singularly communicated the genuineness to lead and sincerity of purpose to the ordinary American citizen directly to their radio sets. And it resonated!

The then American president did the job himself. He did not outsource his mandate. He did not talk to his compatriots through appointees or aides. FDR ignited a personal connection with his fellow Americans which became known as “Fireside chats” FDR delivered 30 of such in office;

“Thousands of letters had begun pouring into the White House every day, many of them expressing gratitude for the president’s words. A single fireside chat could generate more than 450,000 cards, letters and telegrams.”

PMB should do same! Nigerians are neither “haters” nor “wailers” as PMB’s mostly lazy and unimaginative supporter’s spin. Like Americans during FDR’s time we have now entrusted our collective national destiny to him irrespective of our partisan differences.

A leader is a leader and must seen to be so. The best way to shut up critics is by establishing a covenant with the masses by speaking to them ex tempore – not the speeches written by dolts somewhere inside the Villa. Since 2015, Mr. President has done only one Presidential Media Chat!

Lai Mohammed, Garba Shehu, Femi Adesina and all those other eye-service persons around Mr. President are hired helps. Nobody voted them into office. They have no mandate beyond their “stomach infrastructure” and their loyalty is their pay checks and the privileges they can temporarily enjoy.

Fellow Nigerians, whether you voted for Mr. President or not is beside the point. He is a duly elected and sworn-in leader to all of us regardless of our political differences and squabbles.

Only Buhari can rescue Buhari and his presidency. My own is to siddon look.

Leadership is about trust and connecting with the led. Appearances matter. FDR had polio and was wheelchair bound. His movement was therefore restricted. So, he reached out by radio. Today, there is Social Media and Television.

Therefore, Oga Presido, get off that sofa, drop that call and remove your legs from the center table. Stand up, run the good race and recover your national constituency!