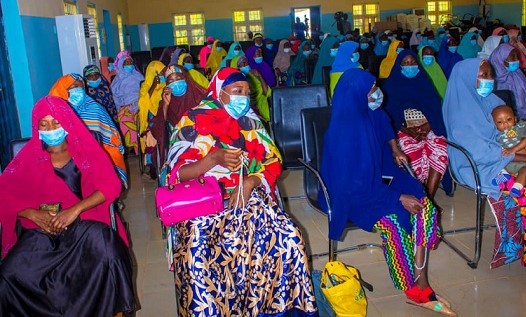 European Union, UN Spotlight Initiative in collaboration with Sokoto state ministry for Women Affairs and Children Affairs have commenced training of over 200 Women victims of Vesico Veginal Fistula (VVF) and Gender based Violence (GBV), on Skills Acquisition Training to boost their morale.

The five days training for women and adolescent girls on livelihood and skills is co-sponsored by EU, UN Spotlight Initiative with the Sokoto State Ministry for Women Children Affairs and Budget.

Speaking at the event, the State Commissioner of Women Affairs, Hajiya Kulu Sifawai said the aim is to prevent Women and Girls against all forms of violence and grant disbursement holding at Sokoto Women Development Centre.

Sifawa maintain that the participants will be trained on tailoring, knitting, animals husbandry, sewing knitting mong other skills.

She stated that after their training, each participant would receive either tailoring and grinding machine or three goats in addition to a token amount, as start up capital.

The Commissioner explained that women who were victims of GBV and VVF diseases that were targeted for the training program would also receive support and empowerment packages to start a new life.

She noted that the training was aimed at boosting the morale of women especially those who were victims of VVF as a result of prolonged labour and those whose rights violated.

According to her, the ministry also engaged in counselling, guidance and other women enhancement program to improved on their psychology for the trauma they went through during VVF surgery.

Dantsho stated that the training also allows the trainees to be train on the trades of their choice, this according to her includes teaching of various trade skills.

She further stated that the two ministries of Women Affairs and that of Budget and Economic planning were collaborating with EU, UN Spotlight and other donor agencies in the five years program aimed at ending all forms of violence against women in Sokoto state.