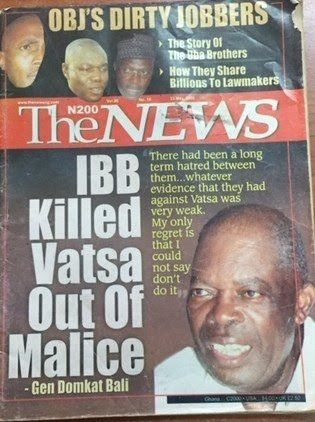 With a scintilla of nostalgia, the headlines of the May 13, 2006 edition of The News exposed in the public domain, an inconvenient truth. It largely featured in it, the interview that Babajide Kolade-Otitoju had with the recently deceased General Bali at the Ikoyi Golf Club.

Back then, the resident maestro of Journalists’ Hangout was Senior Editor of the magazine, who matter of factedly asked the retired Artillery gunner; “that when he worked with Babangida, did he remember one action he took and later thought he should have acted differently? For example, the coup trial that involved General Vatsa.”

General Bali answered without flinching: “I am not so sure whether we were right to have killed him.”

While I truly admire Bali’s candor, his complicity remains. When the heat got too much in the Dodan Barracks kitchen, instead of leaving like Commodore Ebitu Okoh Ukiwe had earlier done, Bali moved nearer to the fridge as they say. Unfortunately, Bali became another victim of IBB just like Vatsa albeit with far less disastrous consequences. Nevertheless, another pawn sacrificed in power play.

This post is a special tribute to him, regardless.  I vividly recall him queueing just like every other customer at a first-generation bank branch in Apapa, in uniform while he was a serving Major General back in the day!

The following excerpts are sourced from ‘Soldiers of Fortune: Nigerian Politics under Buhari and Babangida (1983-1993)’ written by Max Siollun and published in 2013.

Other snippets are from Femi Ahmed’s ‘Domkat: A Biography of General Domkat Bali’ published in 1993. Enjoy;

“The powerful Defence Secretary and Chairman of the Joint Chiefs of Staff, Lt-General Domkat Bali, was then the longest serving and most respected general in the Nigerian Army. He had trained at, and graduated from, the prestigious Sandhurst Royal Military Academy in 1963 and was affectionately called “uncle” by his fellow officers, all of whom were younger and initially junior to him. He had joined the army before Babangida and even before former Head of State Buhari.”

“In September 1983, Major-General Babangida visited Major-General Bali in Jaji. Babangida sought Bali’s opinion on the desirability of overthrowing the (Shagari) government via a military coup. Bali told Babangida that a coup would be premature and to give the politicians more time.

In December 1983 in Jos, Major-General Buhari asked Bali whether he still felt that a coup was premature. This time Bali assented and told Buhari that a coup would not be premature or unpopular. On December 30, 1983 Bali received a note marked “For your eyes only” from Buhari, which was hand delivered to him by Colonel Salihu Ibrahim.

The note asked Bali to come to Jos immediately, so that he could fly to Lagos with Buhari to attend a meeting of senior officers. However, by the time Bali got to Jos (from Jaji), Buhari had already flown to Lagos, leaving instructions for his plane to return to Jos and fly Bali to Lagos. Clearly, something dramatic was happening in Lagos.”

“President Shehu Shagari was overthrown only three months after being re-elected for his second and final term in office in an election that was marred by accusations of electoral malpractice.

A faction of the military government that had handed power to Shagari in 1979 returned four years later to take it back from him ……Major-General Muhammadu Buhari became the new Head of State…..Major-General Bali initially sought the position of Chief of Army Staff, but was turned down by Buhari who explained that Babangida insisted on having the post, and had to be awarded it given the key role he had played in facilitating the coup. As will be shown later, that proved to be an unwise decision. Bali was instead appointed Defence minister.”

“Only a year after coming into power, Buhari’s honeymoon period was over. The economy languished under pressure of crushing external debt; unemployment and inflation still soared despite tough austerity measures; and the military was becoming increasingly authoritarian when dealing with its opponents……..The lopsided ethno-religious composition of the Supreme Military Council, coupled with the fact that Buhari’s ascension to power pre-empted the zoning of the presidency to the south, prompted some southerners to claim the New Year’s Eve coup was a deliberate plan to prevent a southerner from being elected president at the next election (in 1987)

However, logic suggests that the major motivating role for the 1983 coup was the personal ambition of its primary actors rather than any Machiavellian plot to thwart the south or any altruistic motives to benefit Nigeria as a whole.”

“Major-General Bali later claimed that Babangida and Abacha were really very frightened under Buhari. Nobody knew the reason but they were really hysterically jittery and desperate……Major-General Ibrahim Babangida was Buhari’s greatest threat, although Buhari did not seem to realize it. Buhari and Idiagbon demonstrated self destructive tendency to ignore danger signals.”

“After having a champagne breakfast to toast their success, the plotters inner caucus held a meeting at Bonny Camp to flesh out details of the new leadership.

The meeting was attended by the following who arrived dressed in full battle attire: Babangida, Abacha, Dogonyaro, Aliyu Gusau, Shagaya, Ahmed Abdullahi, Tanko Ayuba, Anthony Ukpo and Abubakar Dangiwa Umar…… It was largely a ceremonial role for Bali, to give respect to his seniority and long years of service. While Bali presided over meetings, he was not authorized to issue operational orders or exercise direct command and control over any military units.”

“Being a member of the clique of officers from the militarily prominent town of Langtang, Bali was thought untouchable. Babangida proved otherwise during a series of military and political reshuffles in December, 1989. Because of his personal respect for Bali, and the prestige Bali held among professional officers, Babangida visited him at his house to inform him that he was being relieved. As compensation, Bali was offered the portfolio of Internal Affairs.

Rather than accept this demotion, Bali opted to retire with effect from January 3, 1990. Babangida gave him a retrospective promotion to 4-star general in retirement.”

A textbook soldier and avid golfer, Bali is survived by a wife, a daughter, son and grandchildren. In 2010, he became the paramount ruler of Langtang, Ponzhi Tarok.